On the Road to Somewhere (Summer 2018 Edition)

The last few Roadmaps we've received for SWtOR have been built up over a few weeks - sometimes even a couple of months - before they're released and people can discuss their expectations and other feelings.

The most recent Roadmap, released today, received no such build-up. It was just released without any pre-announcements whatsoever, just 'boom' there it was.

So with this pleasant surprise, what have we learned?

With The Nathema Conspiracy beginning to tie our characters to either the Republic or the Empire for a more substantial alliance than that on Iokath, there are a fair amount of potential scenarios we could be seeing as a direct result of our choices since last April.

As of Iokath, Acina or Malcom could be deceased and the decision made here decides who the leader of either faction is. Vowrawn steps into the breach left by a dead Acina while Malcom's demise leads to the infuriatingly faceless and voiceless Supreme Chancellor Jebevel Madon stepping down and allowing Galena Rans to succeed him.

The Nathema Conspiracy adds to this by setting up the eventual option for the facilitator of either of the changed outcomes to actually join the faction they potentially screwed over back on Iokath. Alternatively, of course, they could just continue on with their previous alliance and thus avoid any awkward outcomes.

This is a fair amount of variety that we could be seeing going forward, and this isn't even going into what else could be factoring into the factions' strength. This is something which BioWare have attempted to address with Nathema by reintroducing or introducing people who are or used to be important politically and killing them off for certain Classes. Given who some of these individuals are and how difficult it would be to align them with both the political status we've been given throughout KotFE and KotET and how they could severely impact a future balance, it's relatively safe to assume that all of these characters have been given a final farewell.

However, that doesn't mean that there still aren't questions and observations that need to be addressed. Be aware that every significant character a Class will face during the Nathema story will be mentioned here, so if you don't want to know who you'll face before you do, I advise you to stop reading here. 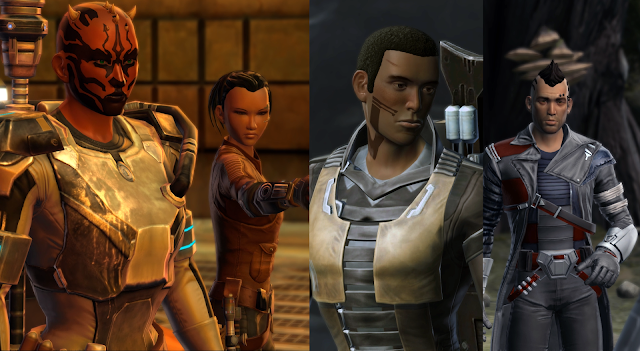 Yesterday, we were treated to a grand total of four Companion reunions. Smugglers and Hunters got to reunite with Akaavi and Mako respectively whilst also being introduced to the other for the first time, Consulars got to meet only their second returned Companion since Qyzen, Felix Iresso, and with the conclusion of the Traitor arc we also get to see Theron Shan 'up close and personal' once again.

Unlike the previous two entries in this series, I don't have any outstanding reunion scenes or - thankfully - any "no skipping" lectures this time around. This one is just purely focusing on the three missions for each of the Companions.