So here we are. The 5.0 patch cycle has now started its third and hopefully final year of life. This is the only expansion in SWtOR's nigh-seven-year history to have completed two full years, and it's certainly been an interesting ride.

As some of you may recall exactly one year ago I published an article looking over 5.0's then-present history. As I described, the first year of 5.0 resulted in nearly every single game activity or function receiving something new. Has the second year managed to accomplish a similar feat or does it feel severely lacking in comparison? 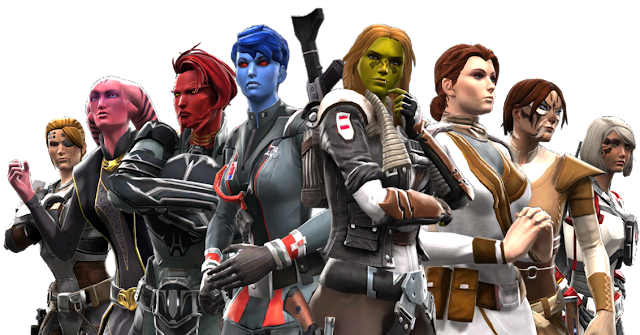 The one thing which has stuck with me across the years as I play SWtOR is that appearance is the one of the most important things when it comes to playing a character. I may like how a character looks in the creator, but if something is off when the character is 'born' and in the open world then I'm going to change that ASAP.

Not even long-term characters of mine are safe from this. Several of the characters who still exist to this day have gone through various changes, sometimes even including species, for differing reasons. Sometimes it's just because a new hairstyle has come out that I want to try. Other times it's because I realised that my characters need to be more diverse than they were at a previous point.

For example, there was one time when I had six Human characters and only two aliens - a Twi'lek and a Sith Pureblood. Of those specific eight characters, only three are in-use to this day and two of these have become a Mirialan and a Chiss.

I've recently taken this into overdrive, a recurring trend with some things these days it seems, to the extent that it is not just outfits which differentiates my characters: None of them use the same primary-Companion, mount, or even colour crystal(s) as another. Variety in species is still something of a sore point, but I'll go into that in more detail further on in the post.

This is a post which I tried to write last year before giving up the ghost without having really started. It's time to remedy this and bore you lucky, lucky people to death once again.

And hey, it is Picture-Posting Month. I might not hit my fifty images but I might as well get some mileage out of it.
Read more »
Posted by Calphy at 13:00 4 comments:

Games such as SWtOR really like to push convenience to an almost luxurious degree. In some regards it's useful, such as 4.0's unlocking all speeder points to a planet, and other times it's downright annoying. For example, I simply can't count how many times my Guild has formed up an Ops group for an Operation that launches from the Gav Daragon and somebody - who knows full well how to get to the Gav - has simply requested a Summon.

This increased convenience has also removed a part of the charm from certain systems of the game. The biggest sore point for some is the fact that the 'rite-of-passage' nature of finding Datacrons on newer characters has been severely lessened, particularly for veteran players, due to the stat-granting ones all now being Legacy-wide. I myself feel they should introduce some small incentive for people to do them again on additional characters, but I sincerely doubt we'll ever see such things implemented.

The other day I was asked to transport a guildie to Iokath so she could farm the Grade 10 Archaeology materials there, since  she had yet to start the associated story on that character, and she commented that it had been a long time since she had manually boarded somebody else's ship.

This comment resonated with me as it touched ever-so-briefly on something which I have been taking some small issue with over the past couple of months. Outside of some very specific circumstances travelling around the galaxy is now incredibly simplistic. Sure, we've had the Daily Transport terminals and various Legacy Perks for instantly hopping to certain places for several years but now we can just instantly hop to every planet or be parked directly outside a Heroic mission just with a couple of clicks.

This is all well and good, but it pretty much negates one of the biggest joys of being inside of the Star Wars universe; owning our very own starship. With the exception of the levelling story and starting some questlines, the ship is almost entirely superfluous nowadays. Not even the combat-modifiable Training Dummy is unique to the ship anymore, courtesy of the Rishi Stronghold including one.

Indeed, it's got to the point where you don't even need a ship to travel to the majority of places in the in-game galaxy since the Heroic transportation items work whether you own one or not. This particular instance has resulted in another one of my guildies not having a ship on the majority of his former Dark vs. Light characters which he had levelled using Heroics alone the moment he could get off the starting planets. This is something of a nuisance since when we're doing something as a Guild he nearly-always chooses to wait for a Guild-ship Summons and that just doesn't work when he's using one of these shipless characters.


I will see him get a ship for all of these characters before the game is done.

I myself had been more-or-less completely ignoring the ships, save for the rare combat-parse, for the longest time until something happened in August. The Manaan Stronghold broke. My Guardian had been calling it her home and for an entire month she found herself without access to her cargo bays on the top floor.

I could have done a couple of things here. I could have simply taken her to Tatooine or Rishi, my faction-neutral Strongholds, or I could have simply placed copies of the bays on the lower floors of Manaan thus ensuring that she could still have used it. However, since neither Stronghold really had 'her' personal flair, I chose to do something else entirely: use her starship.

So for a month she called her ship her home, using it to travel around the galaxy 'properly' rather than simply teleporting using the galaxy map. I absolutely loved it. It reminded me very much of the early days of SWtOR when doing this sort of thing was the only option. Convenience be damned, I still love actually seeing the approach to every planet rather than just a loading screen.

Since this time I've taken things massively to the extreme. While my characters still live in their Strongholds while being logged off the amount of 'convenient' things they do is extremely limited. I now take them down to the planet itself to board their starship in the 'proper' way when I take them out and about and whenever I'm on a planet the only automatic travel options I try to take are the speeder points. Otherwise it's travelling on-foot or by mount the entire time.

I think my recent re-indulgence in Skyrim is fairly responsible for this.

That's not to say that I've been entirely immune from speeding things up. Mainly this occurs when an Ops group I'm a part of is moving from one planet to another to complete stuff quickly, but there are some times when I'm on a planet like Iokath or Hoth that I just don't want to run through a landscape of mobs to get to the nearest available speeder point. I also can't avoid using the personal Stronghold panel to get to Tatooine since the Stronghold terminal on Tatooine itself is (logically...?) placed in a location where you can't travel to anywhere from.

More than anything, this approach is incredibly relaxing. It's exactly the same reason why I love the GSI missions, since I can take as much time as I want and need to do various activities while also drinking in the in-game scenery while travelling between various Dailies and Heroics. There are some in-game days when there's nothing better than just spending an hour or so doing quests in a relaxed manner.

As much as it may seem, I don't have too much of an issue with increased convenience. I do feel that there is such a thing as too much convenience, but this is very much a personal take on the situation at hand. I know a lot of people absolutely love being able to hop around the galaxy at a moment's notice, but for me it's resulted in a very noticeable dearth in charm as time has gone on.

Maybe I'm more of a role-player at heart than I realise.
Posted by Calphy at 13:00 4 comments: