So again the time comes to celebrate another year of running this blog. Three years ago on this day, the blog's initial incarnation, Spawn of the Dread Master, was released unto the world. It was just a bit of a mess, something which probably hasn't changed in three years, but it's certainly been an interesting ride.

As with last year, I still find it rather incredible to say that this thing is still going after more than one year, although obviously compared to last year the amount of blog posts has been reduced significantly for some reason or another.

Regardless, it's certainly been an interesting year. Those of you (un)fortunate enough to have been following the blog since its inception may recall that last year I made the transition from WordPress to Blogger due to my frustrations with certain elements of the former platform (e.g. the scheduling system) finally getting the better of me. Thankfully, a complete transfer of all data, posts, etc. to Blogger was possible, so nothing important was lost.

Although the formatting is still woeful on all those old posts and the comments didn't transition properly (replies aren't staggered but instead all comments in their own right), so this is something that will need to be fixed at some point. Maybe.

The point is that this isn't just a standard anniversary post but also an anniversary of my and the blog's time on Blogger. Let's get started, shall we?

As with last year, the main centrepiece of this post will be the "Top 10 Most Viewed Posts" list, although since last year was a commemoration of my time on WordPress, this year will begin the standard transition to yearly lookovers.

It simply couldn't be anything else, all things considered. It had been at the top of my "Popular Posts" widget for several months after its release and whilst it has now fallen off its pedestal it can still be viewed in that widget to this day.

This is currently only one of two visual guides I have created and it covered a fairly obscure aspect of a Chapter which people would already be searching for guides for online, so unlike a lot of my posts which attracted views via Google searches and proved "useless" (more on this later), this particular post actually provided something of use.

Only took me two-and-a-quarter years.

I have yet to create another post which doesn't accidentally mislead people who have been directed to them via Google. Sincere apologies to anyone who came across such a post in the past.

Oh, look. It's one of those posts.

So yeah. I have a feeling that this post (also worth noting that whilst they have since been kicked off the "Top 10" views Part II and especially my thoughts on Master Difficulty Chapters were also both a part of this list) attracted views because people were searching for guides on completing Veteran (and later Master) Difficulty Chapters.

I still have no idea whether or not such guides actually exist.

This probably attracted attention because of people searching for as much information about 5.2 and the new Operation as possible. There certainly isn't anything substantial here for anyone to really comment on.

Good to know that my far-too-lengthy story overviews (or as I like to call them; "Critiques") still attract some attention. I'm rather sad that I currently don't have anything left to really talk about in a similar manner anymore, but then I don't need more excuses to write overly-lengthy things. I do that too much as it is.

Yet another "jumping on the bandwagon" post, because Galactic Command created a really long-lasting springboard for debates in the Blogging and PodCast community spheres.

Criticisms of Galactic Command reached a peak shortly before this post was published, so this was probably just affirming what most people already felt about the system. Still, I enjoyed writing it nonetheless.

This comparison had been drawn long before I created this post. As soon as we knew the basic plot concept of Fallen Empire, people were comparing the similarities of the concept of the main character of both this particular expansion and Mass Effect 2; both characters were being forcibly 'made absent' from the in-game universe for a number of years and needed to assemble a team of new and old allies to counter a galactic threat upon their return.

It didn't stop at the basic premise.

Both Fallen Empire and Eternal Throne utilised several character and story elements which had been done previously in the Mass Effect franchise, the most obvious spoiler-free ones being Iokath basically being Ilos and the fact that both the Outlander and Shepard are the 'Commander' in a faction known as the Alliance (although whilst SWtOR's "Commander" is theoretically the leader, Shepard still has superiors to answer to).

Heck, there was also a semi-blatant reference to the nature of the Reapers in the Codex Entry for the Eternal Fleet as one of the 'theories' for the Fleet's nature.

This comparison is perhaps too easy to make; BioWare enjoy employing various tropes multiple times, and I'm sure several of them are just as visible in their other big independent franchise, Dragon Age, but hopefully not as many story-related comparisons.

Still, I enjoyed writing it nonetheless.

Again, this one probably attracted mislead views; 5.2 had a rather annoying problem for those who skipped straight past the Fallen Empire and Eternal Throne stories to War for Iokath; they were unable to unlock Elara Dorne or Malavai Quinn. So chances are people probably found this post if they were searching for solutions to this issue.

This "accidentally misleading readers theme" was a recurring theme even during the blog's initial few years. You'd have thought that I'd learned from this by now, but nope.

Not much to comment on for this one, really. Probably attracted some views due to people wanting to know how best to beat the slots, but I don't want to say for sure.


This list was surprisingly difficult to compose. Not because of the contents of the list itself, but more because of how Blogger just had so many different numbers for the viewcounts of the exact same posts. Viewing the "Stats" section for All-Time views listed drastically different numbers for the posts in the actual "Posts" section (e.g. Knights of the Mass Effect isn't even listed among the top-10 in the "Stats" section and Thoughts on 5.0 had a view-discrepancy of a whopping 57 views).

So to be on the safe side I decided to go for the higher number. Still, at least I know it's something to keep an eye on for next year.

Last year I used the anniversary post to announce the short-lived-and-still-on-indefinite-hiatus video series Wednesday Warzones. This year, I have nothing special ready for publication or even a pre-announcement thereof. I was hoping to get something ready, but alas it wasn't to be.

At least I have another year to iron out the kinks.

However, I still do have something (relatively) exciting to announce in this post; the blog's first giveaway!

Now, I must apologise in advance. This was totally unscripted until a couple of weeks ago, which is roughly when it became clear that I couldn't have anything 'ready-to-go' as I had hoped. Thus I haven't been able to really gather anything truly exciting or rare (the direct-buy items such as Satele Shan's Armour Set or the Defiant Vented Lightsaber would have been really sensible to grab spares of, for example, just in case people who still need or want them missed their opportunity to avoid watching the GTN).

However, that's not to say that I haven't been able to scrimp and scrape together the odd interesting item to throw up for giving away.

In last month's usual monthly solitary Hypercrate (which I mostly buy nowadays purely for the Decorations), I was fortuitous enough to get on the good side of RNG. Not with the actual Pack's supposed contents, of course - which weren't the greatest anyway - but with the contents of previous Packs (this Pack being the second to use the - what is it, the fourth one? - recent new innovation to make Cartel Packs appealing by reserving two slots of the five for any Cartel item; one slot giving any quality up-to Platinum and the other merely Bronze or Silver).

Of course, because this was still RNG, I only ended up with four noteworthy items, but I feel that this small-scale 'mixed bag giveaway' pretty much sums up the Blog itself in its current state.

The qualities of the items are as follows: One Platinum, two Golds, and probably one of the best-looking Silver armour sets available. However, almost as if in response to my luck with these items, the pack-of-origin (or one of the three for the Platinum) for two of these items was put up for sale last week, meaning that in actuality this giveaway includes an item that can easily be purchased for merely a couple of million Credits.

Oh, well. It's a nice item all the same, so hopefully somebody out there will want it.

Some rules before we begin.
Anyway, now that's the boring rules out the way, here's what's I was able to get to put up for grabs, complete with deliberately-tacky sales pitch!

Do you have an Assassin or Shadow who is in dire need of a flashy new Lightsaber? Maybe your Dark Jaesa Willsaam is looking a little too "un-Sithy"? Fulfil their desires sooner rather than later with the sparkly Unstable Peacemaker's Dualsaber! 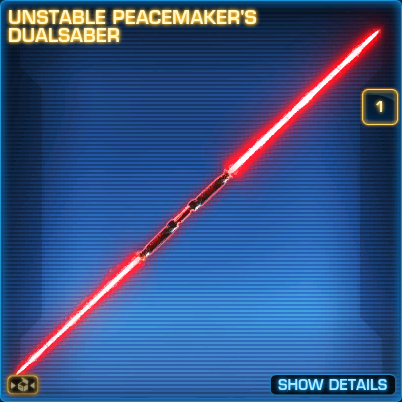 Next, the Gold Decoration.

Are you a proud Trophy Hunter who frequently stalks the sands of Tatooine? Is your Stronghold missing that certain something to get everyone talking? Tick both boxes with the striking Krayt Dragon Skeleton! 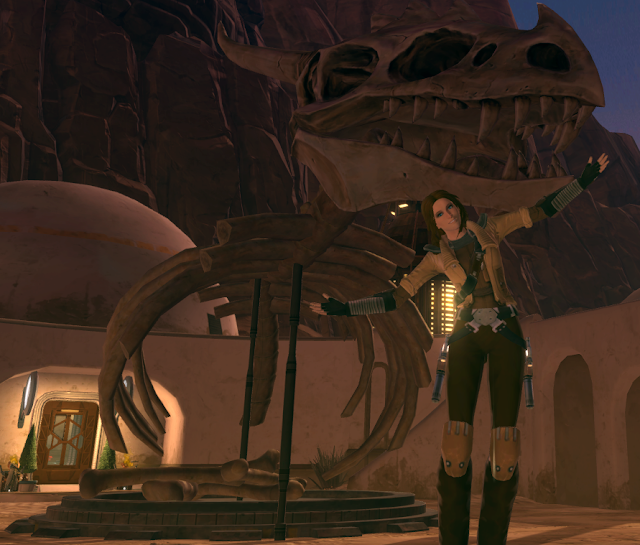 Now for the Gold Mount.

Are traditional vehicles lacking that 'oomph' that really attracts the public's attention? Maybe you just need something that emphasises your explosive personality? Make some noise with the E-95 Dread Behemoth battle tank! 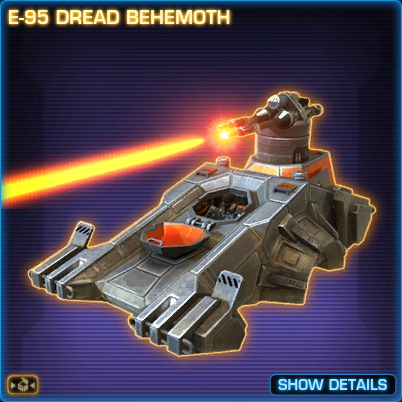 Disclaimer: Galactic Antics is not liable for injuries caused to those bystanders who get just a bit too curious or overly in-your-face whilst in the path of this tank.

Are you a fan of Jedi history as well as a keen fashionista? Maybe your robes are just too traditional for your liking? Make descendants of the Draay family everywhere nervous as you parade around in Zayne Carrick's Armour! 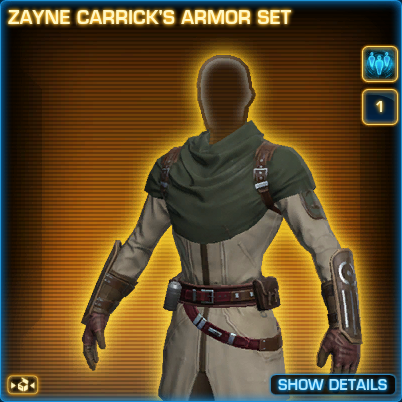 So, there we have it. I had rather good fun writing all those pitches and taking that Screenshot. I should go for the "deliberately tacky" approach more often.

Next year I'll be sure to have substantially better (not to mention more) items up for grabs. This one truly is as much of an afterthought as it seems due to the relative late pulling-together of it all, but I'm still trying to make the most of it regardless.

Is there an award for "most half-assed giveaway ever"?

I'll turn up on Saturday to receive it; cheers.

So another year in the trunk. Compared to last year as I say it is very apparent that my activity has declined by quite some way, and this is something which I hope to improve upon by next year's anniversary post.

Another reminder that if you want to win any one of these items, all you need to do is reply to this post listing your desired item and the character you want to receive it on. Again, the character does need to be on The Red Eclipse.

All that remains is to thank people who have stuck with the blog for any one of the three years. Your readership does mean an awful lot, even if I haven't seemed at all appreciative in the past, and hopefully with this Post begins a phase of occasionally giving stuff back to you in-turn.

Here's to another year of madness!
Posted by Calphy at 13:00