This is my fourth post in my "Thoughts on 6.0" series. You can read the other entries here:
Onslaught provided two brand-new open world locations to the SWtOR galaxy. Onderon makes its grand return to Star Wars media, having been last seen in The Clone Wars in 2012, and Mek-Sha - similar to Voss, Denova, Seline, Darvannis, Zakuul, Odessen, Vandin, and Iokath - is a BioWare-original addition to the franchise. 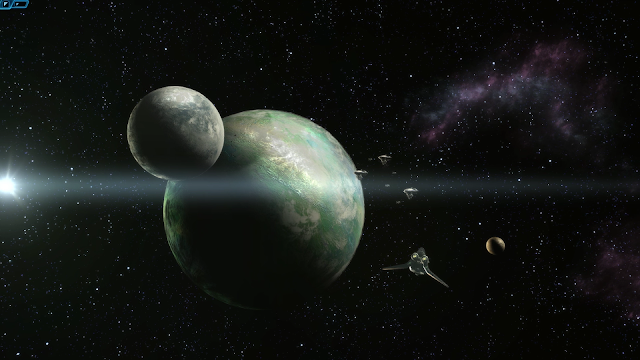 Onderon is the first 'true' jungle planet to come to the game since Rishi and Yavin IV. It's decidedly less cluttered than Rishi, but that's largely because that world was designed to look like a pirate's haven with bits of scrap metal, loose planks, and blaster damage adorning several of the populated locations. Onderon, being a substantially more sophisticated location, blends the rough jungles of both worlds with smart-looking city areas and it makes for an interesting aesthetic. 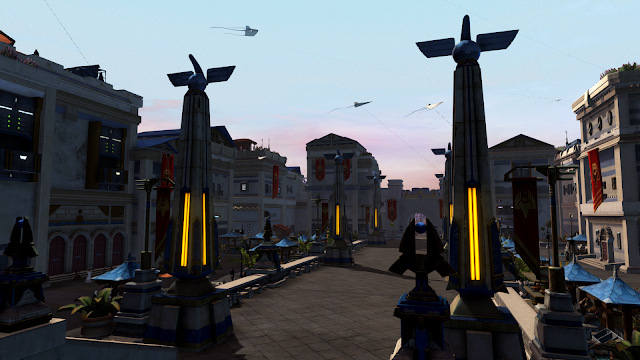 The best way to describe Onderon outside of Iziz and the Hunting Lodge is 'wild'. The only other hint of any technological civilisation on the planet is the camp of former Mandalorians who have come to hunt beasts on the planet's surface. Beyond that, it's just pure untamed forest and high-reaching clifftops. 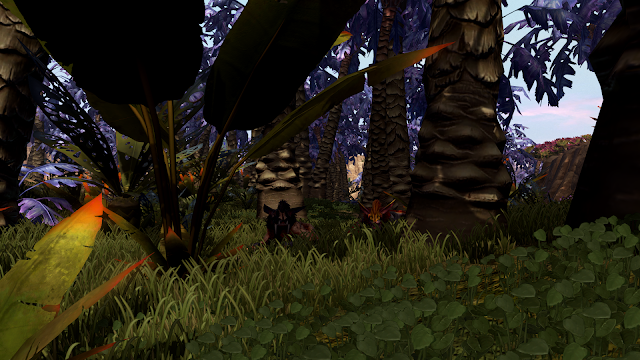 As a result of the jungle being left to its own devices, there are also numerous beasts scattered around. Some, like the Arkonok, are relatively easy to spot lurking in even the densest of trees. Others, like the Pritarr and Orlax, are much smaller and able to hide more effectively in the in-game foliage. It's very easy to stray too close to one such creature without realising and find one hot on your heels. 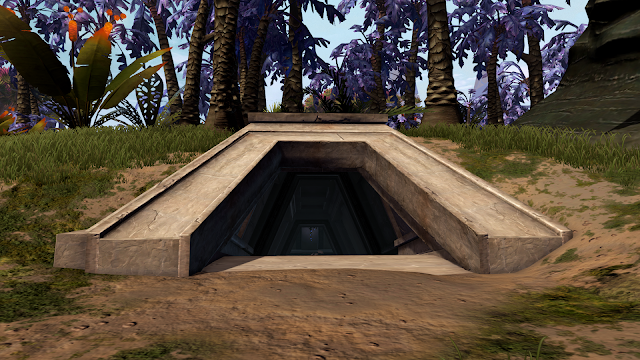 Much like Yavin IV, there are also bits of archaeological ruin which can be found in various locations. Numerous small ruins are dotted around the Untamed territories, but there's also an entire tomb that houses Sith remains topped off with a shrine with its very own bound Sith Spirit. Oh, and there's also a statue of Freedon Nadd.

In terms of secrets and hidden achievements, Onderon has a couple of nice ones and a couple of devious ones. 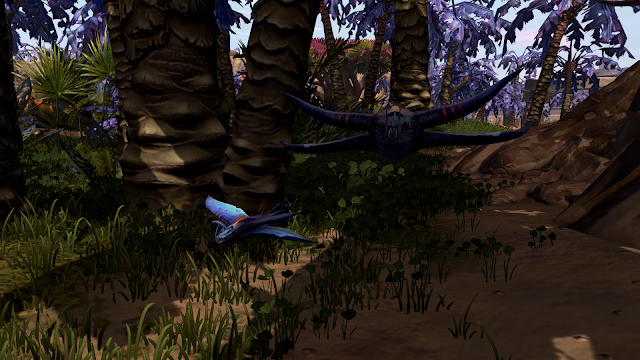 My favourite one of these has to be the Flirron-Friend achievement. This involves finding fifteen morsels of food across the open world (they each have set spawn-locations; XamXam has a guide here) to give to a tiny little Flirron hatchling. Upon feeding said hatchling all fifteen morsels, you promptly get given a Flirron pet - which is, amusingly, substantially bigger than the Flirron you had just been feeding.

The Datacrons are easily the most devious part of Onderon, with the Mastery one being the most devious. The Presence one is also a bit aggravating since you need to be very good at mount-jumping (being a Sage or a Gunslinger with Phase Walk and Hideout respectively makes this a lot easier), but at least it doesn't have easily-missable spikes or a countdown timer to an explosion upon being clicked.

Oh, or a bridge with intangible bricks.

Whomever designed that Mastery Datacron had a lot of fun with it.

Onderon is also the Daily-zone and Reputation faction of the expansion. Its missions range from decent to occasionally frustrating. This is because several of them rely on you finding stuff on the ground, but these exact items can move around; while they may stay in the same place the next day there's also a good chance they'll have switched to a new location.

Should you memorise the potential locations for finding stuff within these missions, they're alright. Unfortunately, that isn't the only problem affecting these missions; the things you need to click are either very small and easily missed or so translucent that they just fade too much into the terrain. 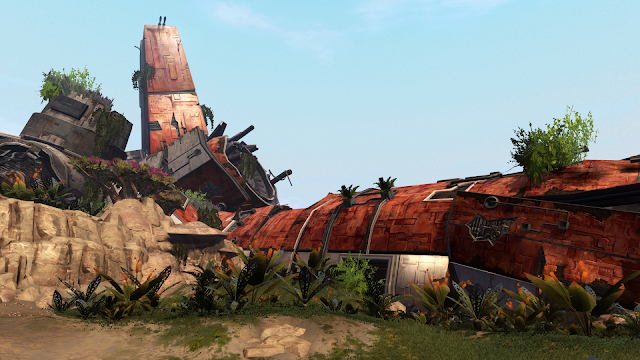 Additionally, one of the Republic Dailies launched in a bugged state so that it couldn't be completed reliably. Yaaaaaaaaaay! 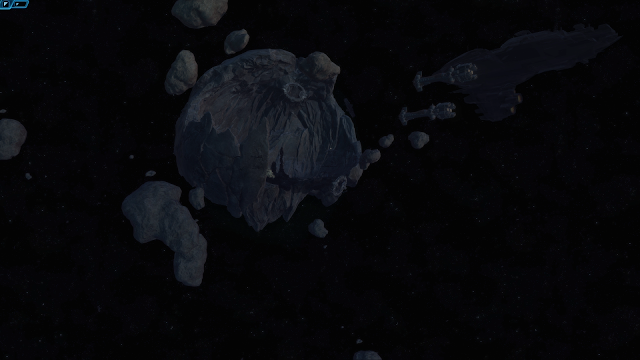 If Onderon is this expansion's Rishi / Yavin, then Mek-Sha is this expansion's Nar Shaddaa. There are dozens upon dozens of holo-signs all over the place, ranging from the standard advertisements we've seen since launch to newer ones promoting Mek-Sha specific establishments. Looking at it once you're on its surface, you really wouldn't be able to tell that it's a refuelling station. 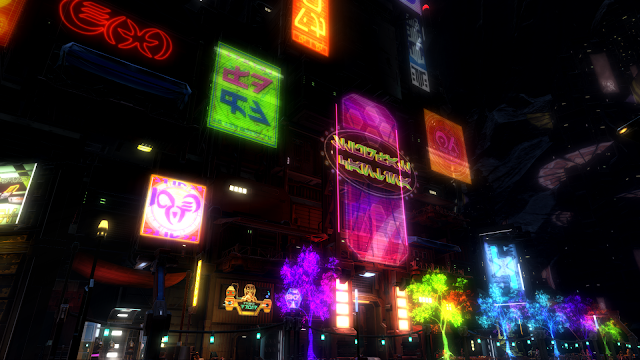 It isn't all just holo-signs and Cantinas, however. 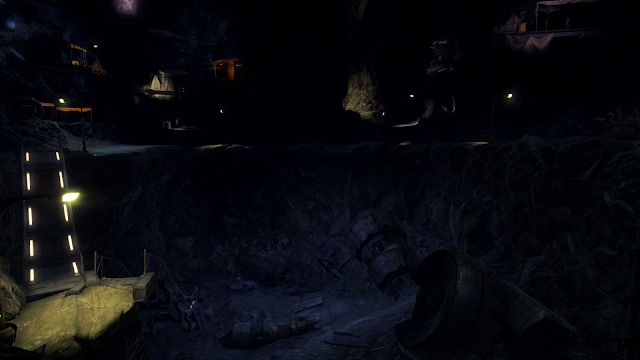 There's one location in particular which largely serves to remind us that Mek-Sha is, at its core, just an asteroid. The organisation known as the Brothers use the Red Zone as their effective base-of-operations with one area in particular, the Scrap Pit, as a location for their most notable (that we see) labour camp.

Unlike Onderon, which can only do so much given its nature, Mek-Sha really embraces its compact nature. Not only is it probably the most compact in-game world we've ever had outside of CZ-198, it's also concurrently one of the most three-dimensional. There are several different tiers to some of the notable areas, with the contested gangland being the most egregious in this regard.

This three-dimensional aspect also extends itself to both of its Datacrons. One requires you to jump and clamber around some storage crates while the other requires not one, not two, but three leaps of faith. Failure in any of these downward plunges will result in your character plummeting towards either sparsely-used piers or the outer forcefield surrounding Mek-Sha itself.

I'd suggest somebody had better send the janitor droids to cleanse that shield every once in a while... 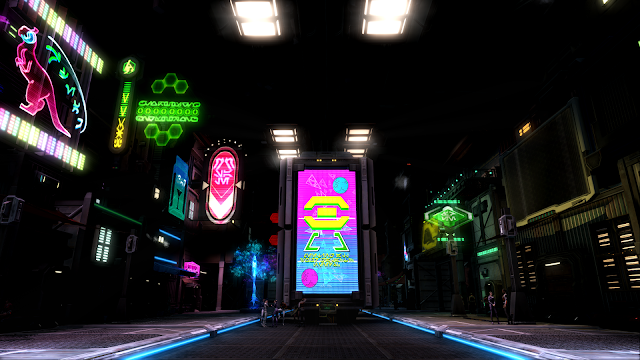 While Mek-Sha does have its own missions besides the main story, there are no 'Dailies' as such, nor is there a Reputation faction to go with it. Instead, Mek-Sha has two Heroics for each faction and four one-time missions. Three of these one-time missions, all found sequentially within the Slugfall Cantina, progressively unlock Decorations from a Shady Underworld vendor.

The Heroics on Mek-Sha are... okay. They can be quite painful at times (particularly the ones that force you to fight a Champion flanked by two Elites), but this is as challenging as they get unless things go really wrong. Like if some of the groups you'd previously killed somehow decide to respawn (despite being instanced) and you've chosen to nestle yourself exactly where they'd been sitting. 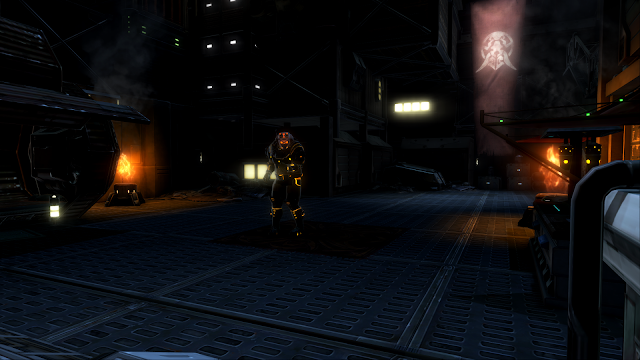 Mek-Sha also gets its own World Boss. Dread Pirate Karvoy just hangs out down in Renegade's Row deep within Brzo's Wells. I haven't yet been in a group which has attempted pulling him but from what I understand he presently drops no loot and has no Achievements associated with him.

It was revealed last week that Mek-Sha would be receiving more missions, including additional Heroics, in 6.0.2 (currently targeted to land in mid-December). Hopefully one of these will finally enable Republic characters to explore that one last area in Junker's Junction which otherwise is only accessible via an Imperial Heroic.

Although I won't say no to new areas either!


Onderon and Mek-Sha, whilst undoubtedly the smallest locations we've received in an expansion update, both leave their marks in a memorable way. Onderon once again enables BioWare's environmental team to show their talents and Mek-Sha is a unique and interesting evolution of the 'cantina city' aesthetic seen in Nar Shaddaa.

We really couldn't have received two locations that were any less alike, as I hope my screenshots demonstrate.

I'm really pleased to see both expansion locations get their own Datacrons. While these are probably going to be some of the most aggravating bits of the two for certain people, they just help feel this expansion feel a lot more 'proper' than some that preceded it.

I'm really excited to see where we get to go for future updates. We already know that one of the next updates will focus on finding the remainder of the Jedi, so I'm curious to see which planet(s) these hidden colonies will be on. I'm sure wherever we go it'll be a great-looking planet.