This is the fifth post in my "Thoughts on 6.0" series. You can read the previous entries here:
Much like any story expansion, Onslaught has provided us with a slew of characters to plot with, contest against, and just have fun chatting with. Some are old, some are new, and two are so obscure you wouldn't believe where they originated from.

Throughout these character posts, I will not be referring directly to any story moments since I tend to use a spoiler watershed until a month after an expansion's launch. These next three posts are just generic looks at each of the characters in question.

Thus far, none of my Imperials are saboteurs. Every one of them who has played through Iokath and beyond have stuck behind the Empire at every turn.

As a result, the only Sith on the throne for me is: 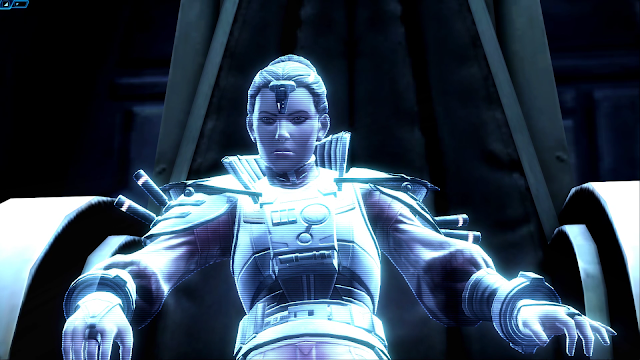 As Empress, Acina is just... Empress Acina, really. She doesn't really get to do an awful lot other than to preside over the Dark Council's meetings and provide a loyalist Commander the opportunity to rejoin the Empire. I really hope that we get to see her in a more active role later on, as in this expansion she only appears via holo. 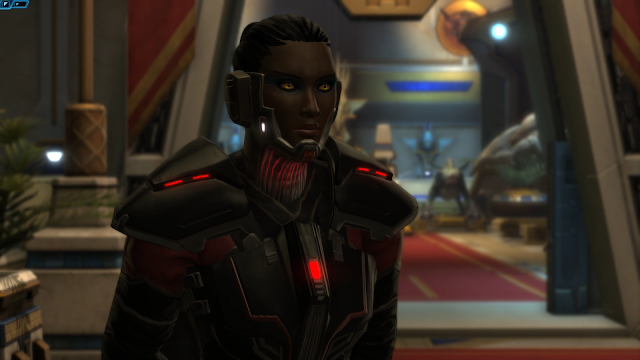 Darth Savik, Malora's replacement on the Dark Council, is the primary Dark Councillor of this expansion. She's a major presence throughout both factions' stories on Onderon and has a past connection to Republic characters.

This is because Savik had previously been in the game as a named mini-boss in the final Republic mission on Corellia. Her sole purpose there is to guard a door and be defeated without a single word being uttered. Thus, her first words in this expansion are also her first words in the entire game. 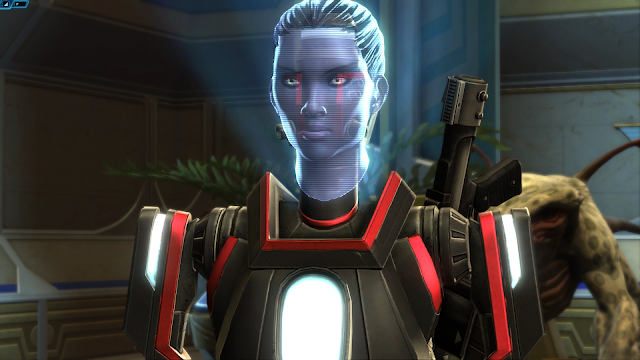 Since she is in charge of the Sphere of Scientific Advancement, there has to be something about her which can reflect this role. Where Malora focused on the biological side of things, Savik focuses on the technological. Her personal forces are represented by remote-operated droids which are also the most-common enemy a Republic Commander faces during their Onderon story.

Beyond this she proves to be reasonably adept at calculating how things are going to happen - although, as she mainly demonstrates this with regards to the incredibly predictable King Petryph, it's not as if this skill is demonstrated to its best potential. 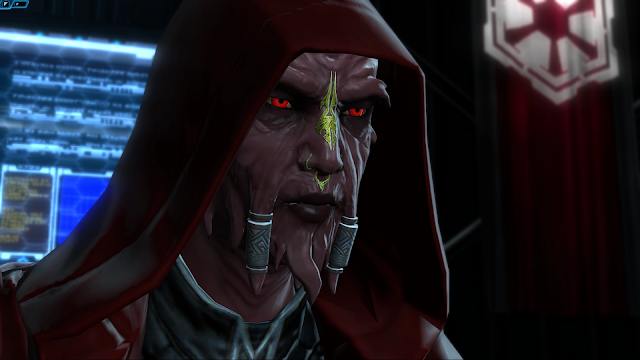 Darth Vowrawn, when he's not serving as the Emperor, serves as the head of the Sphere of Civil Administration. There's not an awful lot of this that's really reflected in his role this time around since he's merely on Mek-Sha to oversee the success of the Empire's plans. I would imagine, seeing as his replacement Darth Shaar uses this excuse, that he would cite his role as his reasoning for being on Mek-Sha to a Republic Commander if Acina is the Empress in that scenario.

It's great to see Vowrawn taking an active role in the story again, and it's especially interesting seeing other Imperial characters interacting with him. Somewhat disappointingly, the Inquisitor doesn't seem to get any specific interactions with him reflecting their past seat on the Dark Council. 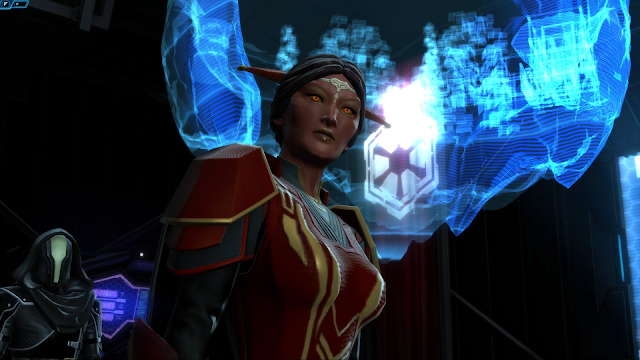 Regardless of whether or not you sided with Darth Acina, Darth Shaar makes her presence known for both factions on Mek-Sha. She's there either aiding Darth Vowrawn in his role as Dark Councillor or is there operating as the Dark Councillor herself, depending on your story outcomes. 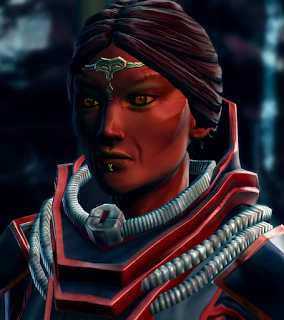 Once again a returning minor character, Shaar was last seen on Belsavis as an Imperial Heroic quest-giver. Given how brief her appearance there was, there wasn't an awful lot about her character which could easily be discerned aside from her rather... passionate... history with a certain Lord Raxxus. While it's still a bit odd to be seeing such minor characters now be important (just wait until the ones after Krovos!) Shaar in particular benefits from this increased exposure and she's probably my favourite of the new potential councillors.

In many ways, she's very similar to Darth Vowrawn, meaning they complement each other superbly when on Mek-Sha together. Like him she's very outwardly charming, even to her enemies (although, granted, it's easy to tell she isn't being very genuine towards a Republic Commander), and she has quite a sophisticated personality. 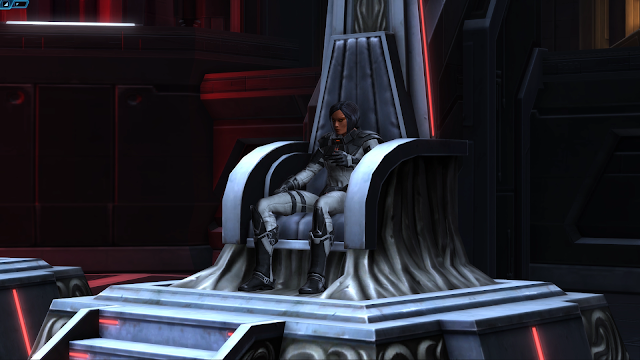 Darth Krovos returns, having last been seen in her new position following the Hearts and Minds mission. Rather than making speeches, this time Krovos, as head of the Sphere of Military Command, is one of two Sith spearheading the assault on the Meridian Complex on Corellia. Her tactics are very impressive, albeit potentially incredibly destructive (collaterally speaking), and I look forward to seeing what she can bring to the table in later story updates. 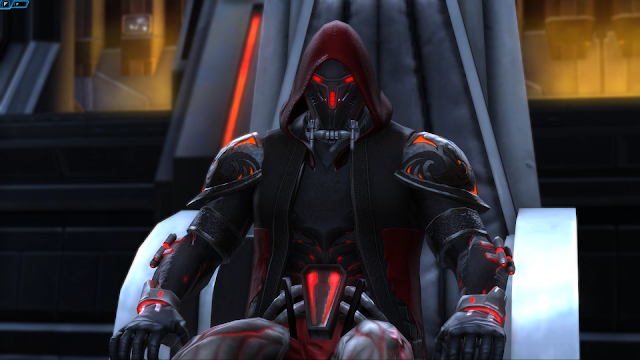 Darth Xarion is one of two Sith Lords whose background is, somehow, even more obscure than Savik. He and another Sith Lord, Anathel, were first identified in a Grade 3 Diplomacy mission as being two warlords doing battle with one another. Nothing more was revealed about them.

With the revelation that there was a new Dark Council, Xarion's name emerged as one of the new members. Anathel too, but we'll get to him next. Xarion is the head of the Sphere of Galactic Influence, which just so happens to incorporate Sith Intelligence. Thus, if a Republic character proceeds to side with the Empire, it is Xarion who eventually establishes contact with them in Onslaught.

I'm interested in seeing how Xarion's role develops throughout the future story content, particularly since my Imperial story-main is an Agent. It's been too long since Intelligence received exposure via the story and I'm really looking forward to seeing it expand. 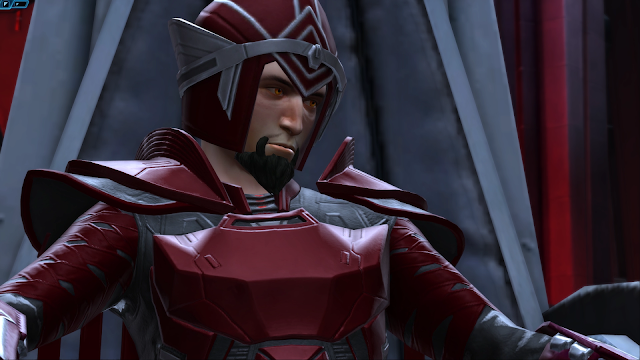 Darth Anathel, the head of the Sphere of Sith Doctrine, is just kinda... there, really. He does nothing of note other than just sit around in the Dark Council chamber. But then, as a Sith Inquisitor can very quickly establish a rivalry with him for being in their seat, there aren't a lot of situations they could have written him into without the two potentially being at loggerheads so much nothing would get done.

As much as he is just a nothing character (for the most part; I'll come back to that rivalry later), I am interested to see how his role develops later on. 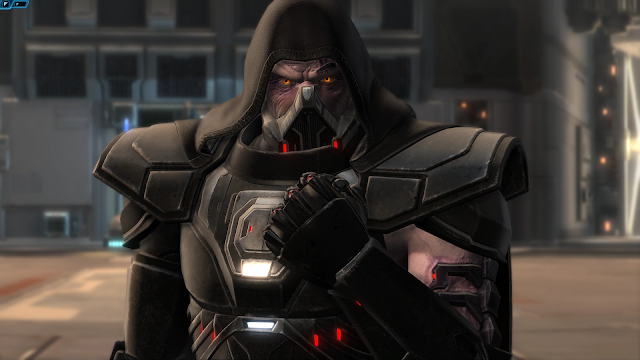 Darth Malgus, despite not being a part of the Dark Council proper, makes his presence known to them throughout the expansion. He's the main liaison between the Empress / Emperor and the various Dark Councillors on-duty, and he even tells the Commander to keep the various Councillors in-check. The main goal for the Empire is to stop Republic reinforcements refuelling by any means possible, and nothing else matters.

We also receive some more information about his various control methods. Rather than mental conditioning being used to enforce some control, it transpires that Acina implanted actual explosive devices within his frame that could be detonated if he went rogue.

It's quite barbaric, but given Malgus's past you can't blame Acina for wanting to just push just a little bit to the extreme here.

Malgus is once again given to players as a temporary companion; he accompanies the Commander to the final boss-fight in the solo-story version of the Corellia Flashpoint. Given the nature of that boss-fight in solo-story (so - many - knockbacks) it's generally far easier to let him fight Tau Idair by himself until the constant knockbacks end.

I'm interested in seeing how his role develops, particularly following a certain moment in the story... 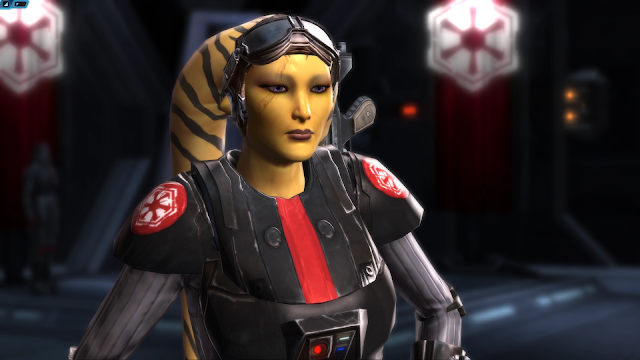 Major Anri is back again, serving as a primary character throughout the Imperial Mek-Sha storyline and as the companion throughout the majority of the Corellia Flashpoint.


Given her only very brief appearances, there's really not a lot to her character that's all too notable this time. She demonstrates once again her camaraderie with her men (disappointingly, her chief scout Brax - while making a blink-and-you'll-miss-it cameo appearance - shares no audible conversation with her in Onslaught) and there's a fair bit of snark in her conversations, but we've seen all that before in Jedi Under Siege.

It's still great to see her again and I really hope she becomes a full companion for Imperial loyalists at some point. 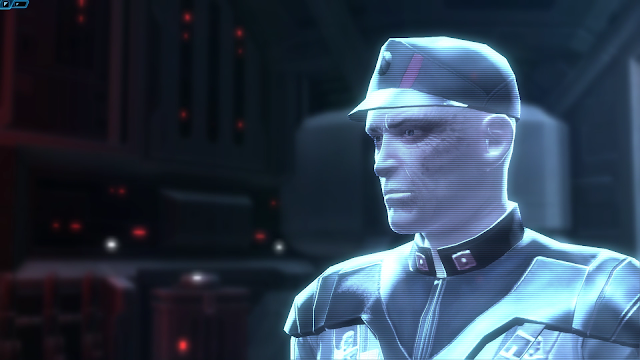 Following his disappointingly-brief appearance in Jedi Under Siege, Moff Pyron makes an appearance in Onslaught which is... disappointingly brief. While we finally get to see the Silencers in action alongside the Isotope-5 fleet, there's really not too much to his character here. It's great to see him finally making good on the Silencers and the conversation he shares with the Inquisitor is particularly good to see, but beyond that he's just kinda... there.


Oh, well. More of him to come in the future I hope. It would be interesting to see how he fares should he be the primary boss of a future Republic storyline, for example.

Disappointingly, we still haven't seen him share any interactions with Anri despite her being in charge of his best soldiers. Aww. 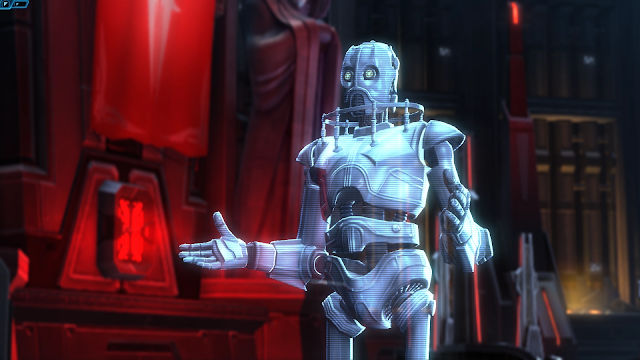 NR-O2 only makes a very small appearance at the end of the expansion's story for loyalist players. He just establishes contact with the player via holo to offer his congratulations for their fine work to dent the Republic on the Empire's behalf and then signs off again.

He has a much more substantial role for Republic saboteurs, however, as he asks to meet them in-person on Nar Shaddaa and subsequently introduces them to Darth Xarion. Whether this means he'll fade more into the background for saboteurs while Xarion takes the wheel is unknown, but I hope he continues to have a fair bit of relevancy for saboteur players.

More than anything from this expansion, it's great to finally see a Dark Council sitting in its entirety at long last. Really think about that; not once had we previously seen a council with all of its members present at any one moment, not even during the conclusions of the Inquisitor or Warrior storylines.

Of course, as is the way of things, there are still empty seats in this version of the Council; the chamber appears to have been built to accommodate the original twelve Spheres and there are now only five in the new Dark Council. There'd be fewer long-distance holocall charges, that's for sure.

Beyond that, there's really not a lot else to say without getting too much into spoiler territory.

It's great to see Anri back in particular, same with Krovos, and it's nice to meet the updated Shaar at last. Anathel, Savik, and Xarion, not really having had characters before, are... interesting... additions to the roster. I'm curious to see what BioWare has in store for all three of them.

I'm disappointed by the brief showing of Moff Pyron once again. While he does play a more substantial role than in Jedi Under Siege, it's not by any means substantially longer. But hey, at least he's back again.

Malgus gets to do some really quite interesting things in this story, but I'll leave my thoughts on exactly what he can do, or enable the player to do, in the story posts.

Until then, that's pretty much all I can say about the Imperial characters.