This is the sixth post in my "Thoughts on 6.0" series. You can read the previous entries here:

The Republic forces are essentially the defenders of the expansion, trying to stop the aggressive Empire from crippling its war effort and any necessary reinforcements. There are quite a few returning characters as well as some quite interesting new characters.

Having recovered from Malgus's solo-attack on the library in the Republic version of Jedi Under Siege, Gnost-Dural serves in an official advisory capacity to the Republic military and the Alliance Commander. With the other Jedi in hiding and Satele... compromised... Gnost-Dural is the closest thing the Republic has to a Grand Master in this version of the story and he's well aware of it.

Given his advisory role, he doesn't really have a lot to do here. He does get to at least do some significant stuff off-screen as he rallies the Green Jedi on Corellia, but this is the most he gets to really do. Otherwise, his main contributions to the story are to introduce the player to Arn Peralun, suggest that a future story thread will involve finding the remaining Jedi, and to give a loyalist Jedi Commander who rejoins the Republic a seat on a new fledgling High Council.

I'm ecstatic to see him taking a more official role after Jedi Under Siege and I look forward to seeing how involved he's going to be in future story content.
BioWare, if you make him a companion I shall forever love you. 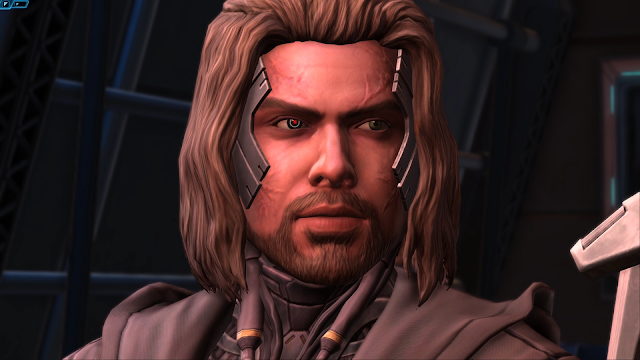 Arn Peralun is the Padawan whom Gnost-Dural has assigned to Tau Idair. The two of them don't actually meet until the player is on Onderon, so we get a few brief conversations with him by himself.

Arn is very much defined by his cybernetics. His injuries, caused by an explosion on Dakot-7 which resulted in nearly 80% of his body needing replacing, meant that he missed out on years of Jedi training. As such, he's a very roughly-hewn Jedi who isn't too sure of his place in the Order. Very similar to Tau Idair, essentially. 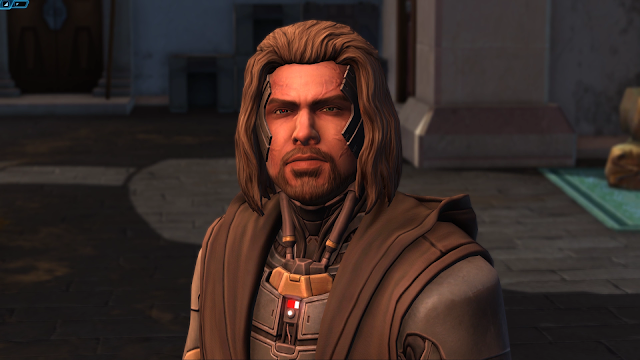 His past catches up to him a couple of times in the story. The screenshot above captures his shellshock-like reaction to explosions on Onderon, and on Mek-Sha he doesn't take too kindly to the Brothers. He views slavers as the worst scum in the galaxy for taking others' lives away from them, which I believe may stem from his own life being taken away from him to an extent by his injuries.

His relationship with Tau is a fairly key point in the story, and there are a couple of moments when things will change depending on decisions the Commander makes. Notably, informing Tau about Arn being in the Brothers' territory will result in them getting a stronger bond while neglecting to do so means that there is a little rift growing between the two of them. In the latter case, this also causes Arn to require extra recovery time following Corellia, whereas in the first he's more-or-less as right as rain.

Arn's voice actor, Max Mittelman, is also the same person who voiced Vinn Atrius in the traitor arc. It's good to hear his voice again from a character who will have some more longevity and likeability.

I'm very interested in seeing how he develops, both as an individual and as an apprentice of Tau's. There's some indication that he may be liable to falling to the Dark Side, which may be a future plot-point for saboteur players, but for now it's just another thread out of dozens that emerge from this story. 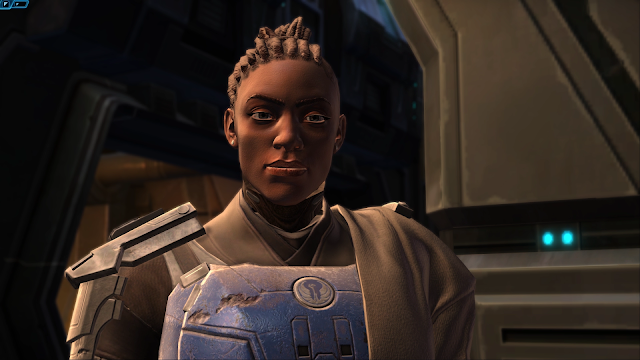 Unlike her Imperial counterpart from Jedi Under Siege, Major Anri, Tau receives a decent amount of character development in Onslaught. Pretty much all of this is courtesy of her now having Arn as an apprentice.

It's very clear from the off that Tau is not comfortable being in a teaching role, but as the story progresses she does begin to warm up to it. There's a wonderful moment when she teaches Arn about how his senses can be deceived by asking him if he can sense Lana in the Onderon armoury; he can't, but that's because she's actually out checking one of the gates on the perimeter.

It's interesting to see Tau take on a different role this time around, and I really look forward to seeing how she develops both as an individual and as Arn's teacher. 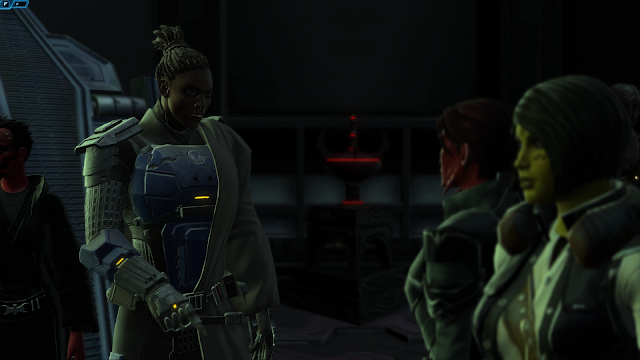 This also goes two ways; of the three Jedi mentioned thus far, Tau is also the only one who's definitively around for both factions. Gnost-Dural is either dead or captured, meaning that he can't find Arn to introduce him to her in the Imperial story. What this may mean for her can't realistically be discerned at this moment in time; it's possible that she may become Grand Master in the Imperial story, and it's equally possible that someone else may emerge to bear that mantle in future content. Regardless, it was interesting being on the receiving end of her wrath instead of being on her good side for a change. "Who?" I can hear some people asking.

Sal-Deron is someone whom a player only meets if they are an Imperial saboteur. Jonas Balkar describes her as "one of the best covert operatives (he has) ever known". In the subsequent conversation, Deron will ask the saboteur for their help in protecting the remaining Jedi, implying that she may also become a character for Republic loyalists.

Either that or she's the "new Gnost-Dural" for Imperial players.

I haven't actually seen her myself in any of my story playthroughs, and I hope that I will be able to meet her at some point as  Republic player. If not, it's no big deal, but I like the fact that we are steadily getting the names of more Jedi survivors. 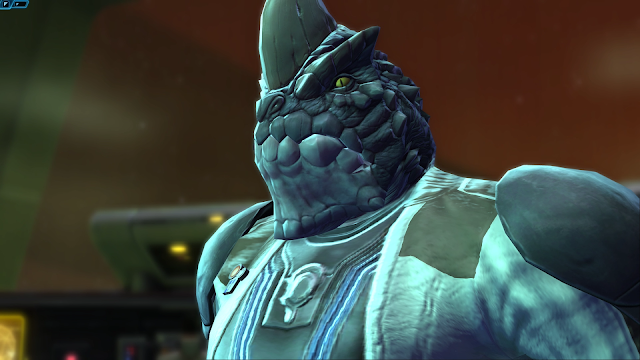 Much like Gnost-Dural, Ardinondu Dipolus Daeruun serves primarily in an advisory capacity in Onslaught. We've yet to see him get his hands really dirty, although as he accompanies a troop of soldiers (and Gnost-Dural) into the Meridian Complex it's evident that he's not above getting involved in ground combat.

Much like Major Anri, Daeruun is not all too different from what we've seen before. He's fairly boisterous, shows his enthusiasm for Gatalentan tea, and is still a remarkably likeable character. No reference to painting, however. Shame.

It remains to be seen whether Daeruun will succeed Jace Malcom as Supreme Commander, but as Malcom is either deceased or inexplicably absent it is quite likely that he shall do so at some point in 6.0's storylines.

Since Imperials have yet to interact with him, we're also yet to see his "darker side"; while he is mostly incredibly jovial for a Republic Commander, we haven't yet been in a situation where he is in any way angry. I'm intrigued to see when such a moment may emerge, and I hope we get to see him interact with our Imperial characters at some point. 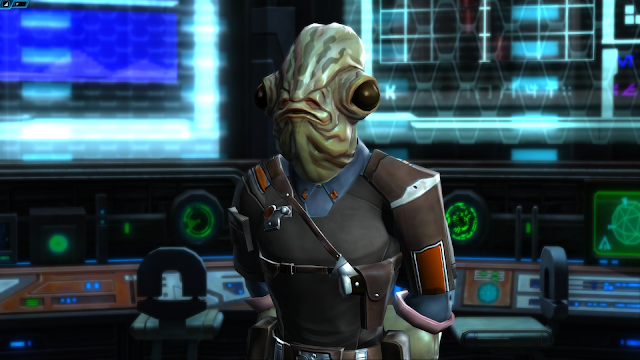 Well, well, who could have predicted this?

Dol Narlock returns after a whopping seven-and-a-half years since we first saw him on The Esseles. He's had a fair few promotions during this time period, presumably because BioWare wanted to give Republic players a familiar Republic official during the Mek-Sha story and Narlock, being one of the only few notable story characters whose fate is non-determinant, was a prime candidate.

Regardless of their actual reasoning for choosing him, it's great to see him again. 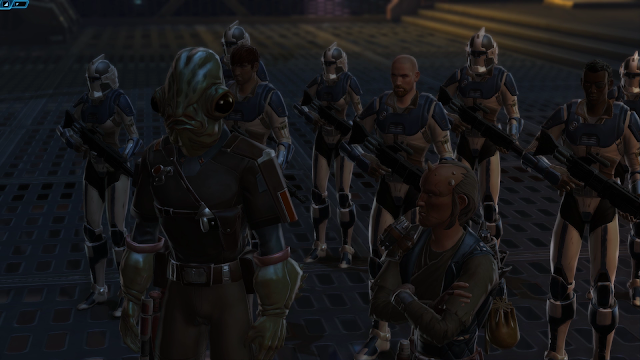 And look, he even brought those three soldiers from The Esseles along with him as well!

Numinn, much like Moff Pyron, makes only a brief appearance when discussing strategies for defending Corellia from the Empire. While he does actually get to stick around during the final conversation, he's entirely mute throughout.

There's not a lot else to his character other than this, but it's still great to see him back again. 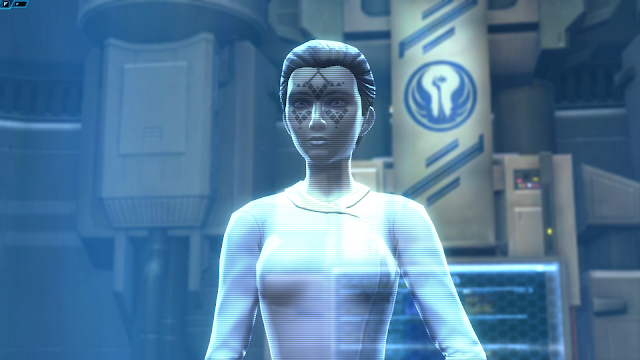 Since 4.0, BioWare have consistently shied away from shedding a lot of light on the position of Supreme Chancellor of the Galactic Republic. Saresh was deposed and Jebevel Madon, who was apparently little more than her puppet, took over before he was summarily moved on without making a single appearance. This last detail is directly called out during the Traitor Among the Chiss Flashpoint if you sided with the Empire, but it was only from the most-recent State of the Galaxy report that we'd learned that his departure held true for Republic-aligned players as well.

So it was that in both cases where he departed, his shoes were filled by Galena Rans, the spouse of the former Supreme Commander. Sadly, the other Rans is nowhere to be seen. I do hope BioWare gave him a good retirement.

As Supreme Chancellor, Rans is a far departure from Leontyne Saresh. She likes to make jokes every now and again and is on the whole very likeable, but we haven't yet seen her under any sort of pressure or faced with a difficult dilemma. Saresh was really quite likeable on Taris but quickly annoyed a lot of Trooper players when she suggested handing Rakton back to the Empire and it only went downhill from there. We haven't yet seen Rans be afforded such a moment, and I hope we don't for a while.

While her appearance here is very brief, I for one am absolutely thrilled that we have finally seen our new Supreme Chancellor. I'm still very disappointed Jebevel Madon came and went without as so much as seeing a picture of him. I'm still holding out hope that we'll get to see him make at least some small appearance at some point...

Jonas Balkar serves in an identical capacity for players as NR-O2: he makes a brief holocall to Republic loyalists to congratulate them and requests a face-to-face conversation on Nar Shaddaa with Imperial saboteurs.

While his role is very small this time, it's still good to see him and I hope that he becomes the new director of the SIS. That position is still theoretically empty unless they make it so that Marcus Trant is actually still alive for everyone who isn't a fully-loyal Agent.

Compared to the Empire, which had a lot of returning minor characters of varying degrees, the Republic's characters feel a lot more fleshed-out. It helps no end that a lot of the Republic characters across the years aren't subject to potentially-determinant fates, of course, as this is what prevents the Empire from having access to a lot more characters than it presently does.

I'm very pleased to see Gnost-Dural and Daeruun sharing an advisory position together and I think they complement eachother nicely. Tau Idair seems to be developing quite nicely as Arn's teacher and Arn himself has a fair bit of potential.

Jonas, Narlock, and Numinn don't really have a lot to say or do but it's still great to see all three of them back again. While I suspect Narlock won't be around again as a significant character in future content, I'm sure we'll see more of Jonas and Numinn.

I'm a huge fan of Galena Rans. It's so nice to actually see a Supreme Chancellor once again and I hope that through her we get to reunite with the Rans we knew from Ilum. I'm quite sad we didn't at least get a conversation option to ask about him.

All-in-all, I'm very happy with the selection of Republic characters. I look forward to seeing where each of the more significant ones fit in with subsequent bits of story update.

Next up: The Characters, part 3 (Onderon, Mek-Sha, and Corellia)
Posted by Calphy at 13:00