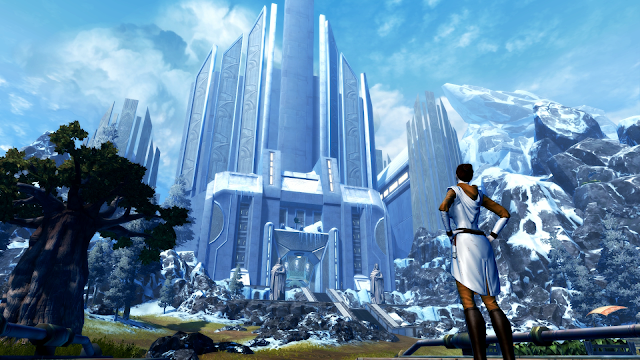 Ever since Strongholds have been a thing I've been voicing a wish to get an Alderaan Stronghold at any given opportunity. Alderaan is still my favourite planet in-game all these years later because I find it to be absolutely gorgeous, so I was keen to have any excuse to park at least one of my characters there on a nigh-permanent basis.

So when BioWare placed a teaser for the newest Stronghold on Fleet in 6.0.2 I was absolutely thrilled to discover that it was to be an Alderaanian one. I loaded up the PTS as soon as it became available to check it out and I loved what I was seeing.

Since it was announced, I planned to 'give' it to my Sage, Vihala. My Gunslinger has Rishi, my Guardian has Manaan, my Imperials have a half-finished Dromund Kaas, and my Trooper (and until now, Vihala) just has Tatooine by default.

Funny to think that the Stronghold I had put the most effort into first is now something of an afterthought...

As a result, this estate has been turned into a Jedi Academy of sorts, so expect to see more than a few Jedi themed decorations, including the occasional Jedi NPC, in the following images. 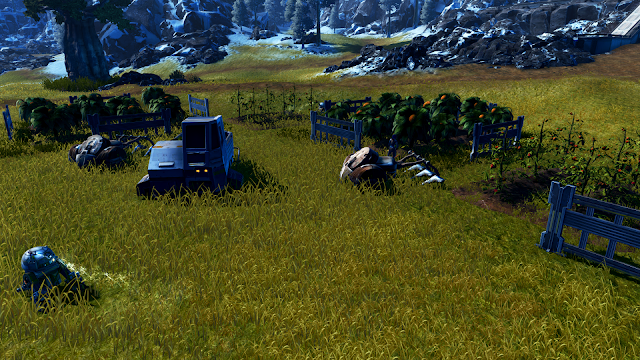 This is so far the only area which I know absolutely needs finishing. I still miss a Melon Crop and two Farm Fence decorations from the Dantooine Reputation vendor, which I currently just don't have enough Surveyor's Notes to buy. Otherwise, I consider this little farm plot complete. Those Emergency Response Droids make for excellent sprinklers, even if the one on the left is currently watering Alderaanian grasses. 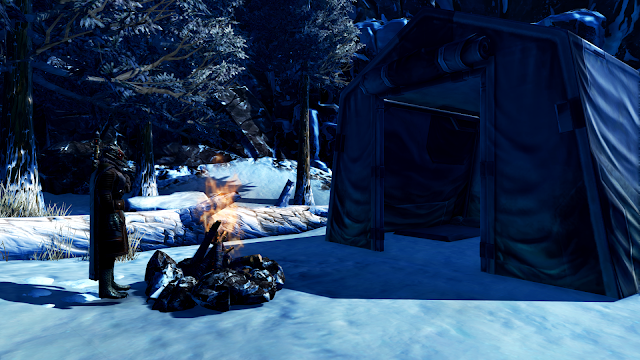 Here we have a little camp where Qyzen is resting before he inevitably goes off to collect Jagganath points in the mountains. The Vorn Tiger population has seen a massive decrease in the vicinity of this estate, and I can't help but think there's a connection here...

Incidentally, I'm really proud of that tent - the bedroll seen within is coupled with some crates as part of the Refugee Camping Kit, yet when placed in the right location you can leave the crates outside the tent and just have the bedroll inside. I'm nothing if not resourceful. 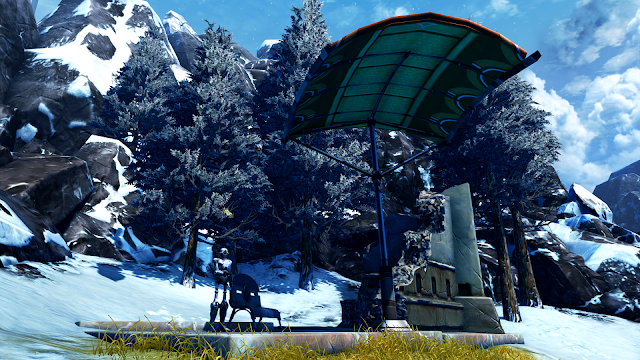 This platform has been turned into a waiting area for the Thranta taxi, complete with sunshade. Thrantas are only one-person animals after all, so guests to the estate must need someplace to sit and wait for them to gracefully fly their way back to the pickup point. 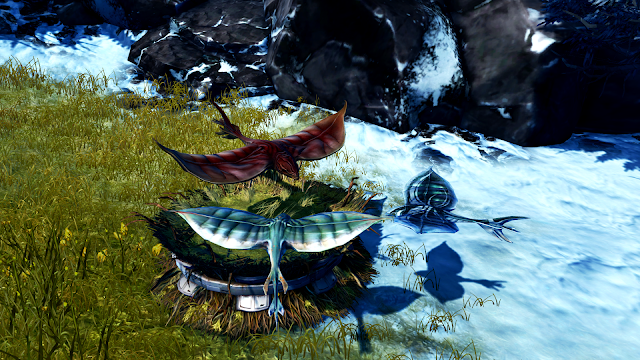 Speaking of Thrantas, I can't have an Alderaan Stronghold without making use of my remaining Thranta Nest decoration and once again using both Thranta pets alongside it. I'm sure that nothing bad whatsoever can come about from adding more Thranta to this estate. 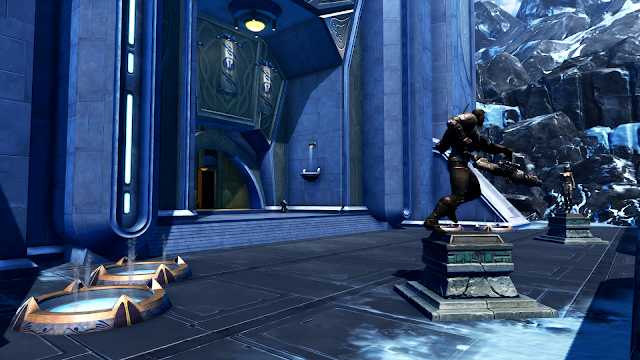 I wasn't sure how best to use this space. I currently feel that uncluttered is the way to go, so I just put down four Jedi Temple Fountains and two statues dedicated to the two heroes of Alderaan. 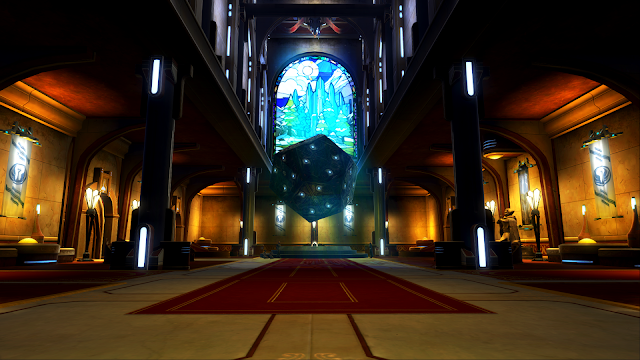 I struggled to find a decoration that really worked as a Centerpiece for the main hall. I tried the Giant Cyan Crystal in both locations but didn't find it to my liking, but then I decided to try the Holocron of Ancient Masters. Sorry, I meant buy the Holocron of Ancient Masters. It's been almost six years since it was released and I still hadn't acquired it because Recovered Relics have always been a nuisance to acquire.

So 65 million Credits later and I finally have one of my Decoration "white whales". It works well here, so as far as I'm concerned this is virtual money well spent.

This hall is also where I had originally tried placing the Jace Malcom and Satele Shan statues, but there are many places within this hall that are very badly lit so in the majority of locations the statues were just cast into darkness. Aggravatingly, while there are some locations where a Ceiling hook could comfortably fit, the only Ceiling hooks are in the highest point of the building. Shame, as a few more hooks like that could really make this place look even nicer with the right lights. 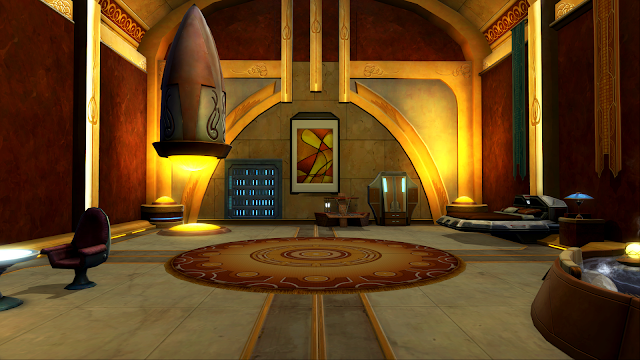 This room is officially called "Guest Chamber", but I think it works really well as the main bedroom. The Northern Lodging building is, in my opinion, much harder to turn into an actual living space and what's the point of owning such a grand estate if you don't actually sleep in the main building yourself?

As an aside, I'm really pleased that the rooms within this Stronghold, while nice and small, are still tall enough to accept the Meditation Chamber decorations without any ceiling clipping. 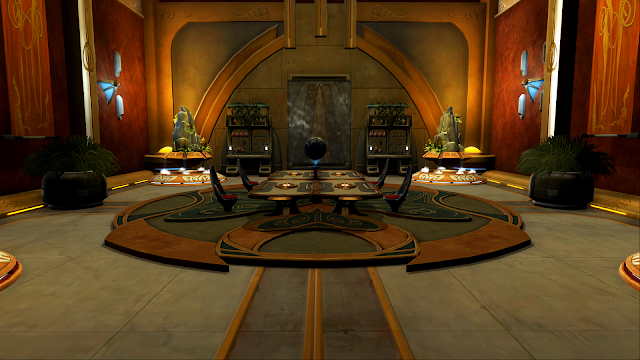 I decided to turn the Drawing Room into the dining room, and I really like the effect of having four of the Aristocrat's Banquet Tables arranged next to each-other to form a larger table. 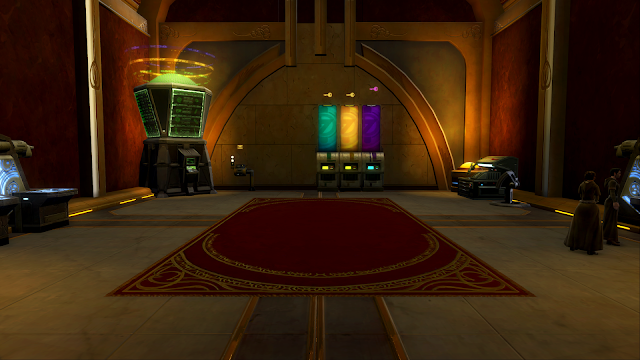 Unusually for one of my Strongholds, I decided not to have a single utility decoration within the main bedroom. While it's nice that the rooms are quite small, they can also get cluttered really quite quickly. I don't know what else I'd like to see in here, but I would quite like to put some extra stuff in this room at some point to really make it more of a utility room. 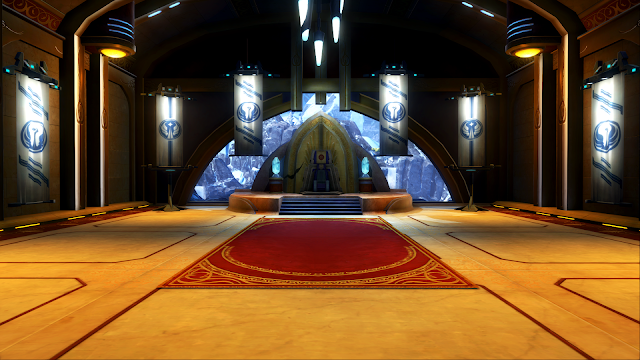 I think there's an unwritten law that dictates that this dais needs to have the Alderaan Throne decoration plonked on top of it. It really needs the Noble Throne Facade behind it to really make it work, in my opinion. Also, while it's great that we have the Task Force Nova banner as a decoration I really hope we get a wall-based version at some point. 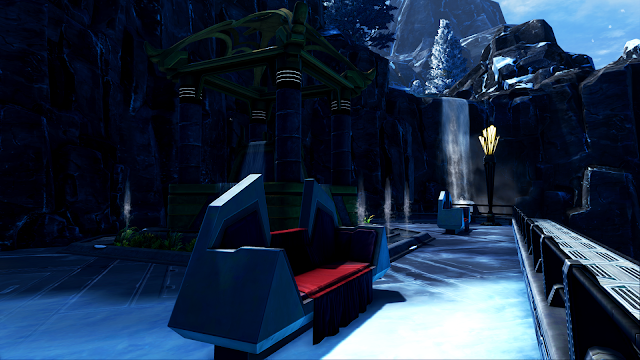 I'm not too fond of this balcony as an actual decoration location. It seems a bit too small and pokey, particularly for an area with a Centerpiece hook. Still, at least it gives guests a nice place to just take a seat and look over the peaceful Alderaanian landscape. 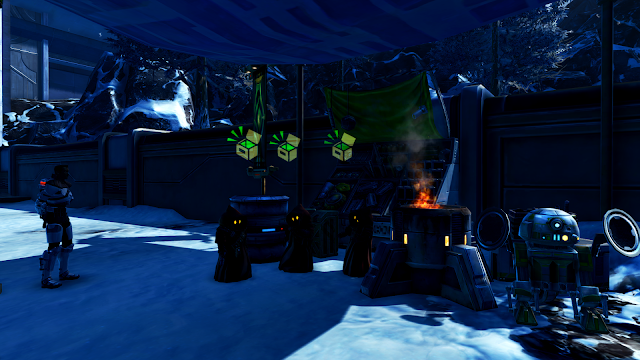 Those blasted Jawas! Every time I think I've escaped their notice with a new location, they always manage to sneak in. I've assigned Iresso to keep a watchful eye on them, just in case they're planning something. That House Rist banner they're apparently trying to sell certainly doesn't do anything to assuage my suspicions... 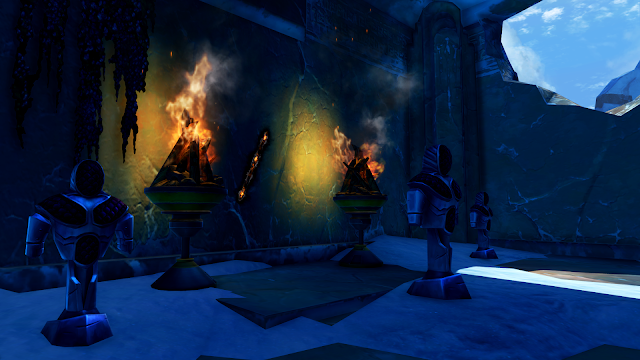 The Alderaan Stronghold also has some target dummies built into it! Unfortunately they are currently unable to have the Ship Repair Droid buffs applied to them so as actual 'functioning' dummies these three sadly aren't quite there yet. I'm still pleased to see them, though, as well as yet another Healing target dummy. 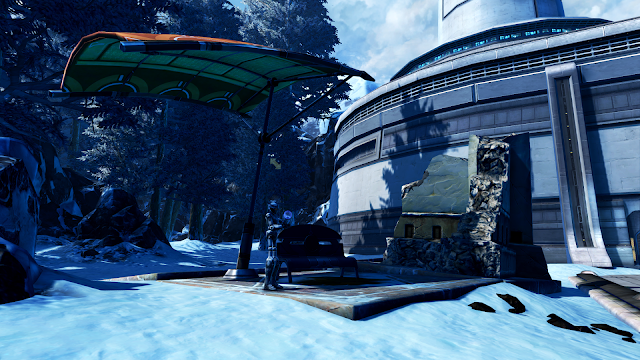 Just like the first area, this taxi pad has also been turned into a waiting area. Yes, I know, it's exactly the same decorations as used on the previous one, but I like a bit of consistency here and there! 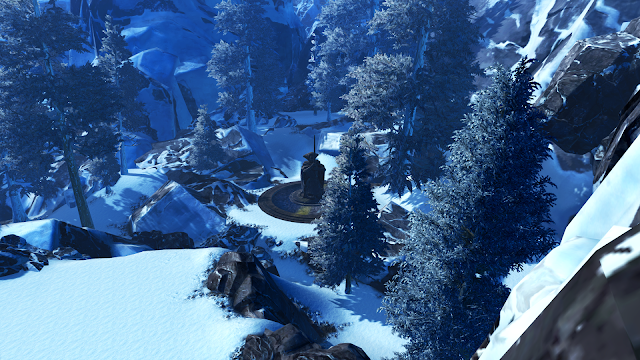 There are many Starship hooks in this Stronghold, a total of six in fact, but of course there are several decent decorations for these hooks which aren't starships. One such decoration is this nice Jedi Padawan Monument from Ossus, and I think it looks great down there in the ravine. 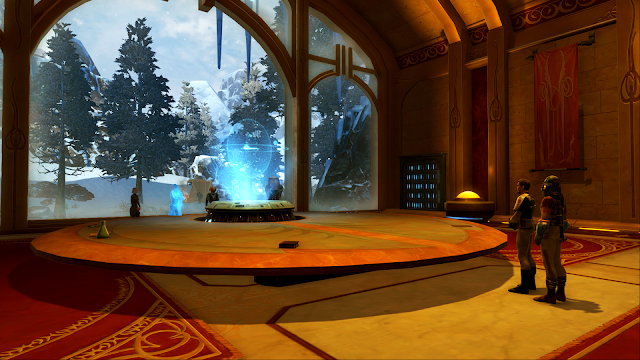 C'mon, you had to know this would happen eventually. I can't have a Jedi-themed Stronghold and not invite Master Gnost-Dural to it. I'm also very pleased to have finally found a decent use for one of the holographic NPC decorations from Corellia, as seen by Tau Idair reporting in to this war-council via holo. Now we just need one of Arn Peralun.

When deciding which Jedi to put where in this room, I discovered that Kira Carsen (as well as Lord Scourge) is not unlocked as a Decoration when acquired at the end of Onslaught, not even on a Jedi Knight character. That's a bit of a disappointment, but I don't think Choza Raabat's complaining too much about it. He appreciates a bit of attention every now and again.

Although I can't help but feel that somebody in this picture is unwelcome... 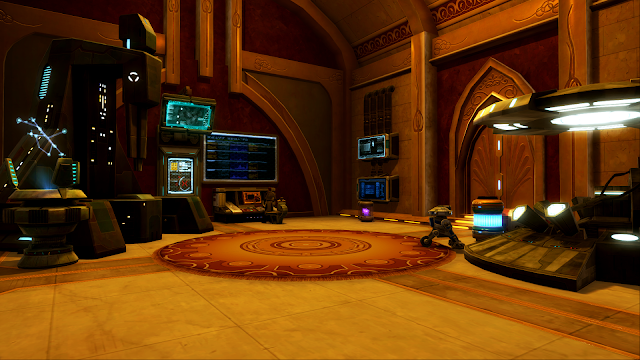 This is the room that gave me the most trouble, at least as far as deciding what to turn it into went. It was only when I was thinking where I could put Tharan Cedrax, having placed down all of my Sage's other returned companions, that the idea for a laboratory sprung into my head. Somewhere along the way, T7-O1 decided to come along as well. The more the merrier!

Although I still have no idea where I would consider placing Zenith when he eventually returns... 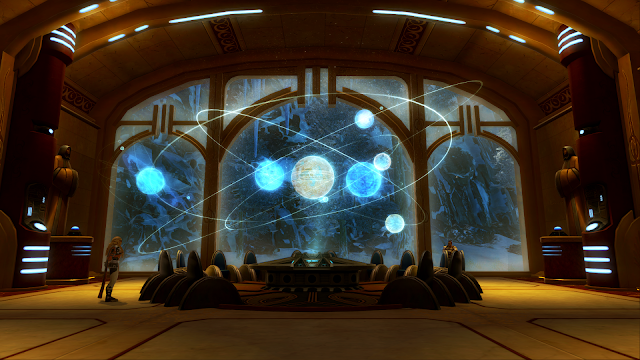 Finally, it can't be much of a Jedi-themed Stronghold without a Council room! I really like these Jedi Council chair decorations, but I do feel that they would have been best as a single unit rather than always bundled in pairs. I'm sure fourteen Jedi will be happy to claim a seat somewhere in this room, right?

Astute Noble Estate owners will notice the absence of the waterfall cave and the Killik hive. This is because I really haven't done anything exciting with them other than place down the Bioluminescent Mushrooms from Ossus in both areas and some Killik eggs in the latter. Not really worth showing off either area when all is said and done.

As much as I do absolutely adore the Noble Estate, there are definitely improvements which I'd love to see made. I feel more Ceiling hooks are an absolute necessity, since the rooms which I used as a lab and Council chamber completely lack them and they would make the main hall of the estate itself easier to light. 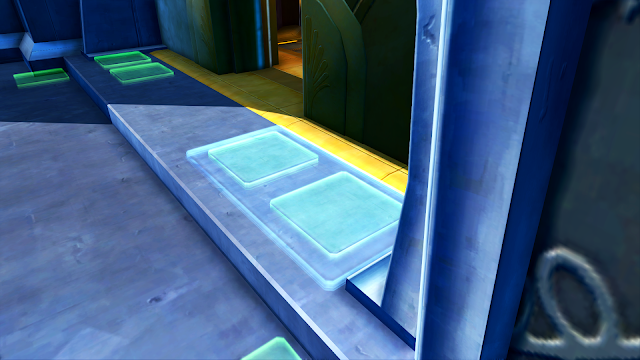 Additionally, there is at least one double-hook; that is to say two hooks of the same type on top of one another. The one I know of is directly outside the front door, but that's not to say there aren't others. It's not something that really needs fixing, it's just a bit of an oddity.

I suspect there's also something up with the giant rock outside the Northern Lodgings. I put my MCR-100 Miniprobe up there, since I always include one in a finished Stronghold as a scavenger hunt for any guests and the next day it had completely vanished. I couldn't retrieve it from the hook for whatever reason and I could put another pet down on that same hook and still consume a decoration space. I have since managed to retrieve my droid and place it in a more secure location, so I mercifully never had to court with the "reset all decorations in this room" button, but still.

I have to give BioWare a lot of credit for the additional thought that went into the background of this Stronghold. There's actually a fair bit of mystery to this building - why a rare estate such as this has become available, what became of its previous owner(s), and what happens when Thranta nests encourage radical behaviour. It's a wonderful touch to this Stronghold that wasn't neeeded but is much appreciated nonetheless.

I also have to say that I suspect that this Stronghold, along with Dromund Kaas when I eventually get around to decorating that properly, will be the last Stronghold I decorate. I imagine part of this is because now that I have my dream Stronghold acquired, I have no idea where else I'd like to see a Stronghold released. However, I'm very well aware that I said something similar in my Manaan Decoration Documention post almost three years ago, and since then I've managed to completely decorate both Alderaan and Rishi, so never say never!
Posted by Calphy at 13:00