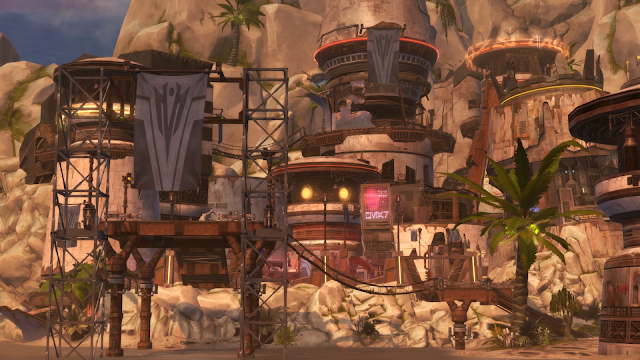 Yes, yes, I know it's been almost two years since this Stronghold was released, but I realised while writing Saturday's Decoration Documentation post for the Alderaan Noble Estate that I had never published a similar post for Rishi despite its being complete all this time.

I actually had written a post for it but it ended up being deleted when I was clearing up some old drafts I wasn't happy with, but I figured it was worth giving it another go now I'm back in the mood for writing about decorating.

When speculation about future Strongholds was in its prime, I was always fairly baffled by the number of requests I was seeing for Rishi as a location. I mean, sure, it's an okay planet but it's almost certainly the most unruly planet BioWare has yet released. Setting up permanent residence on Rishi, to me, seemed like presenting the worst pirates a great big target to raid.

This feeling is hardly lessened by the fact that this Stronghold is literally a truncated form of Coratanni Town (formerly Ruugaria) from The Ravagers, AKA formerly one of the most notorious pirate lairs on Rishi. Regardless of whether or not it's actually the same location, having a Stronghold be visually identical to an Operation area that gets infiltrated relatively easily really doesn't do much to make one feel "secure" within its confines.

With that introduction, I wouldn't blame anyone for thinking that I don't use this Stronghold for one of my characters. As a matter of fact, this Stronghold is where my Gunslinger Cal calls home. Ever since Manaan released and was 'given' to my Guardian, I've been trying to give some of my characters their own distinct homes. In the lore I've written up for my Gunslinger, she was born and raised on Coruscant, but since that Stronghold is currently dedicated to... other matters... I couldn't really use it. I'm not a fan of the Nar Shaddaa Sky Palace so I wasn't keen to use that although it would also work for Cal's smuggler background.

Rishi thus seemed like the most logical option remaining to investigate for this purpose. 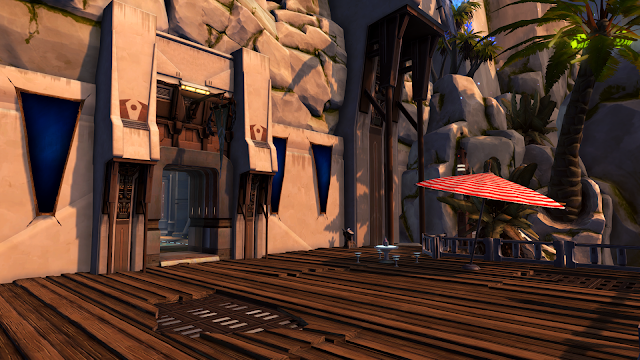 One of the many things I keep consistent across my various Strongholds is my desire to keep certain locations sparse if I think they work well without a lot of decorations. The Overlook balcony is one such location, with the only decorations here being a café table, a parasol, some flags, four lampposts, and of course some railings. One can never be too careful around a ledge in the Star Wars universe! 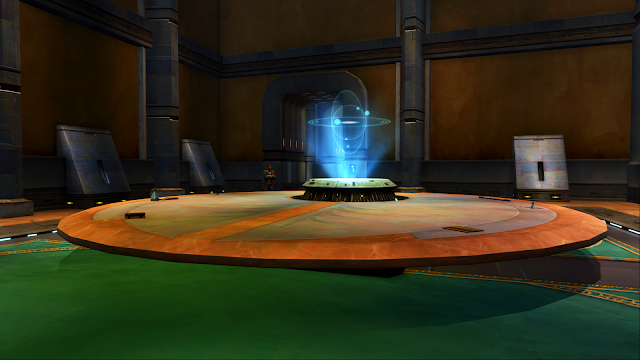 In the disappointing absence of any other Centerpiece-sized tables, the Arrangement: Jedi War Table is pretty much just here as a placeholder. It certainly has no logical sense to be here otherwise, but it works well enough for the time being. 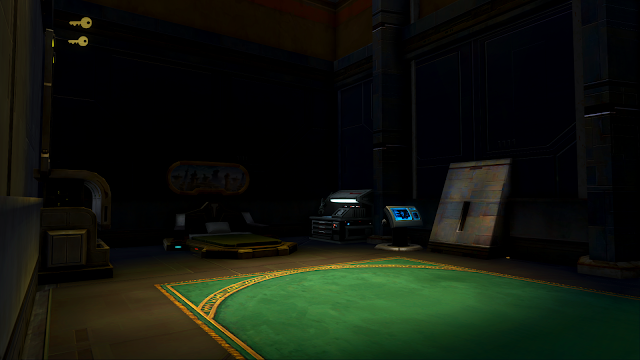 I found this room surprisingly difficult to work with in creating a main bedroom within the Overlook. The fact that it's the thinnest room within this building doesn't particularly help matters. 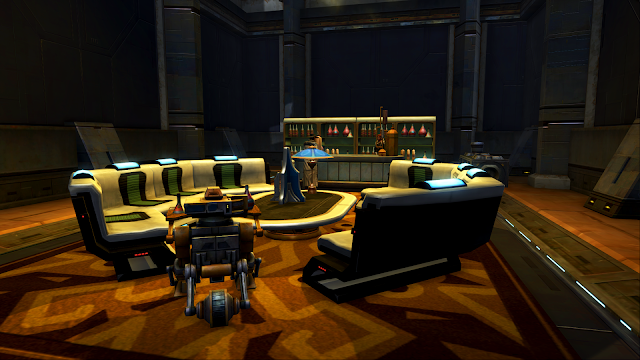 I'm quite fond of this little dining room. That's pretty much all I have to say about it. 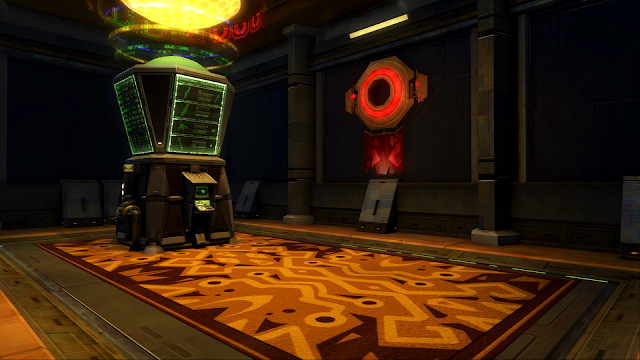 Finally, here we have my Galactic Trade Network room. As I mentioned in my Alderaan post it's fairly standard for me to have all of my utility decorations within or nearby to the Stronghold's main bedroom, but I found that the main bedroom here felt especially cramped with the GTN kiosk inside it. Plus, I really didn't know what else to do with this room. 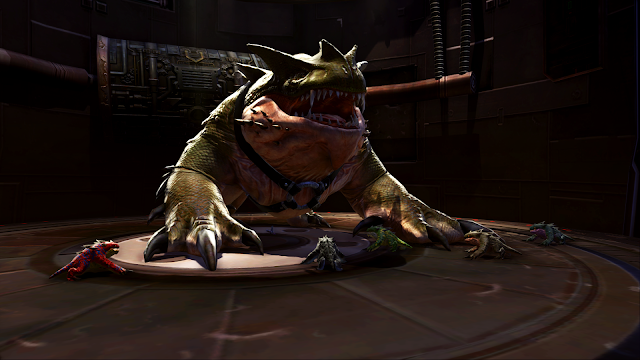 The Cult Drakes have amassed enough power to summon an actual Kell Dragon.

I don't see this going badly at all. 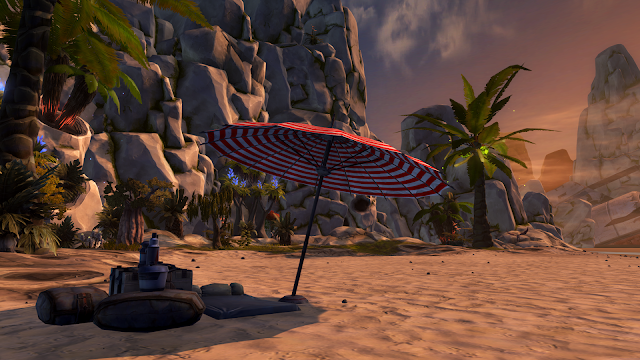 Another key example of my "sparse where possible is best" philosophy, here are the only non-plant decorations on this entire beach; a Refugee's Camping Kit and a Beach Umbrella. There's also a Stoneray somewhere in the very back-right of the screenshot.

I have to express a slight annoyance that, since it is a Flooring decoration, the Beach Umbrella can't be coupled with anything like a carpet. This is particularly aggravating since BioWare made some really nice Beach Towel decorations that, in theory, could work very well underneath said umbrella, but nope. Not possible. Indeed, I believe the only carpet decoration which can be used on a hook other than Flooring is the Copero Resort Rug - a decoration that, as far as I'm aware, isn't actually attainable. 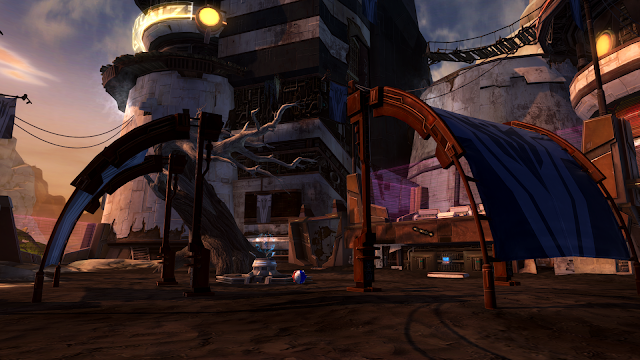 Shortly after the Stronghold released, my guild held a "Summer Games" event. While a vote among our membership to replace our beloved Tatooine Homestead with a Hideout of our own was successful, it didn't conclude in time for the event. Thus, I volunteered my Hideout for the job. This is the first of two areas I created for the events, this one being a "Hotball" event utilising the Custom Huttball Stand.

Unfortunately the Huttball in question glitched out numerous times during the event resulting in the occasional bit of frustration. It wasn't the most frustrating part of that event, however... 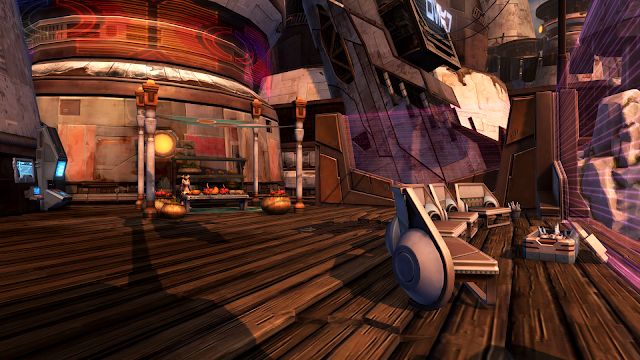 This is just a little spectating area for the event, complete with drinks buckets and a fruit stall with an opportunistic Rishii merchant. As it was, most people preferred to clamber up onto the gateways to watch rather than take a seat, but eh. 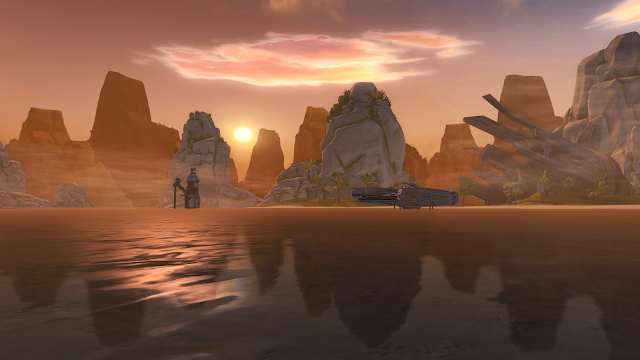 The Rishi Stronghold is glorious for having several hooks in the open water and far beach which, despite being completely inaccessible by foot, really add to the general feel of the Stronghold. 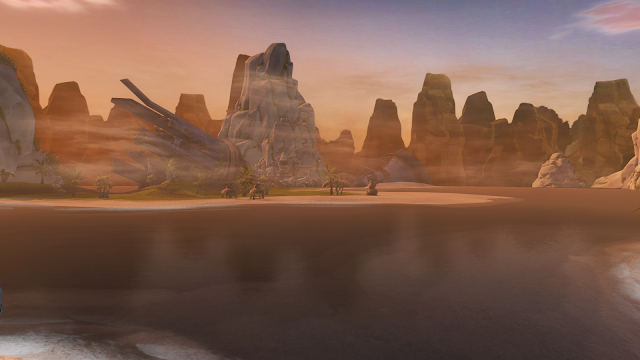 Much like the Killik eggs within Alderaan, it's really nice to actually be able to put the Rishii huts and idols to use in a logical environment! 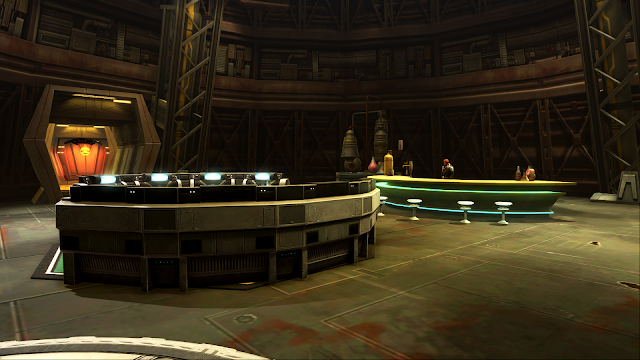 Not much to this one. It's just another small cantina, probably used most by spectators and contenders after a "Hotball" match. 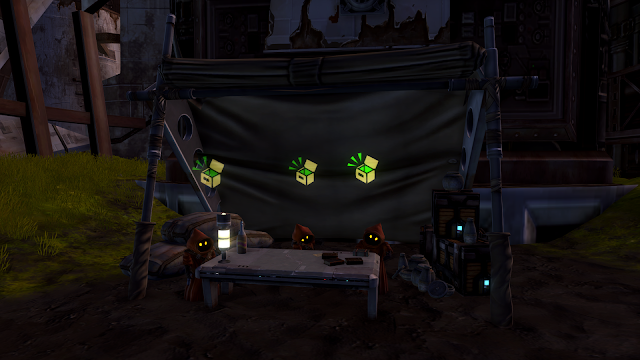 I should really check my characters' ships one of these days. I'm sure the Jawas have put trackers on them all by now... 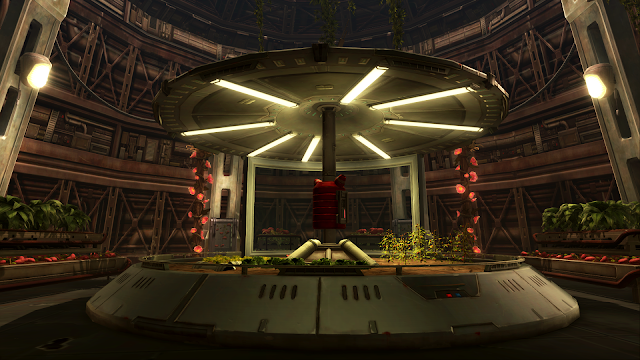 The Sun Room's current state makes me particularly glad that I waited a while to publish this post. Originally I had it turned into yet another cantina because I didn't know what else to do with it, but then 5.10 came out. With it came Ossus and a whole host of glorious decorations that I had always been after; allotment and farm themed decorations! While the Large Terrarium in the centre looks alright, the decoration that I really want to try here is the Irradiated Garden - unfortunately it seems that this decoration is only available as a rare World Boss drop so it's unlikely that I'll be getting it any time soon. 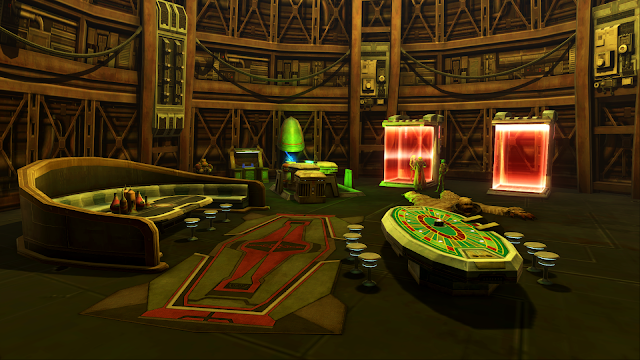 Since this is a hideout, I couldn't resist turning one of the rooms into a smuggler's den. I don't know quite what the Rodian and Gand have planned for that one Twi'lek, but I'm sure it won't be pleasant. 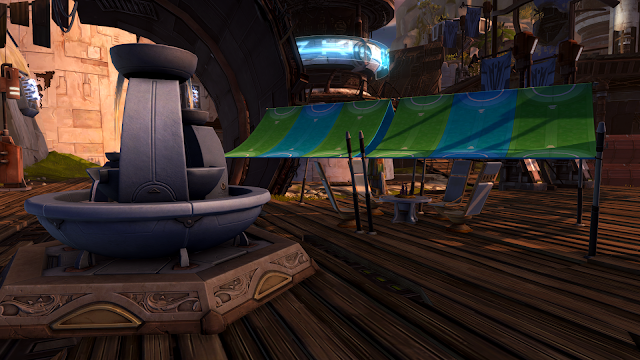 Finally, I liked the idea of just having a little seating area outside. This also serves as a springboard to say that I don't have any decorations placed on the big platform visible in the top left-hand corner. I don't think there are many decorations that really work that well up there at the moment, but maybe that will change in the future. 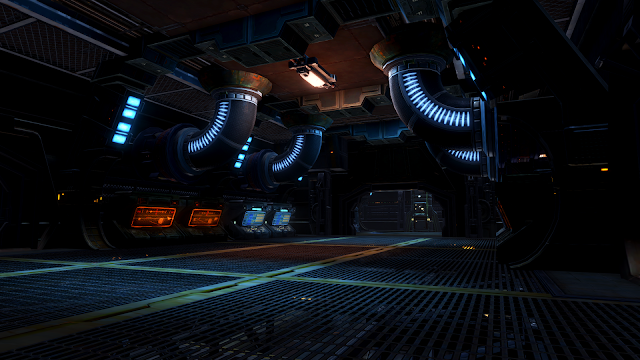 The reactor room is another one of those that I think works best with not a lot of stuff, and these computer terminals fit nice and snugly. 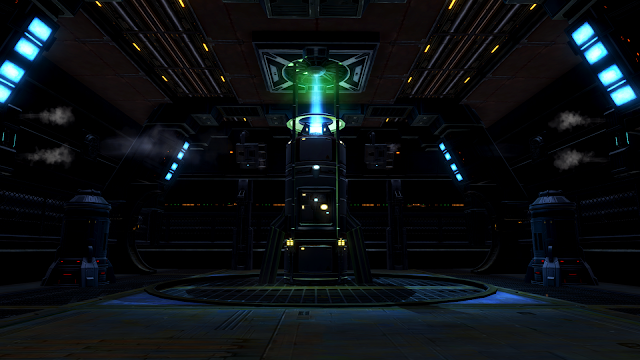 This is one of two structures within this Stronghold that I am most proud of. The Medical Tower works surprisingly well with the Iokath Fan Light, to the extent that one of the people who visited my Stronghold commented that they initially believed the two to be connected. 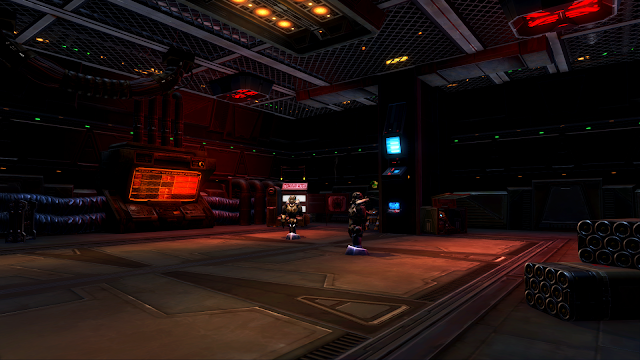 One can't have a training room without placing down decorations that have a military feel to them. I first used the Incomplete Skytrooper Chassis as a Training Dummy stand-in back on Tatooine, so I felt it would be appropriate to repeat the exercise here even with an actual dummy existing within this room. 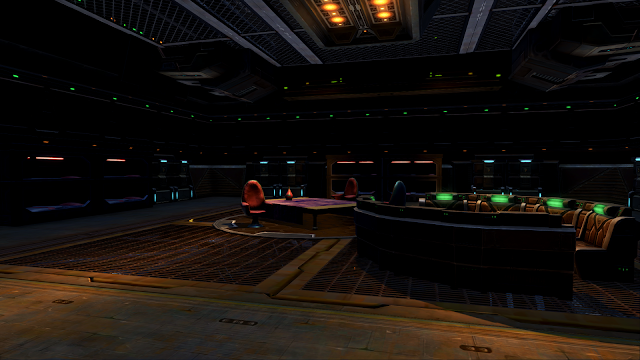 The Port Quarters aren't anything special, but I'm pleased to have found a decent use for the Sith Bunk Beds at last. 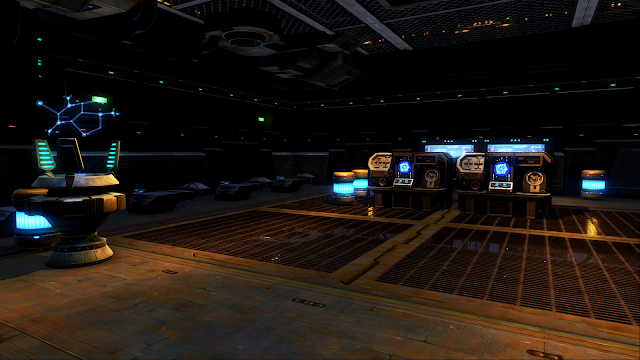 I turned the Starboard Quarters into a medical room, since I felt that this ship really needed one. It may not have the best practices, notably having no means to separate any bed-ridden patients from one another, but it's better than nothing. 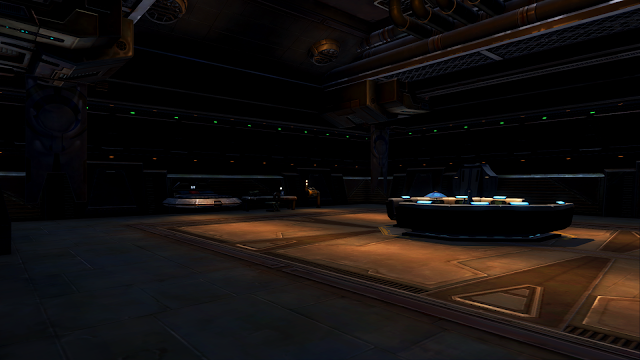 Who says that the Captain's Quarters needs to be a flashy room? 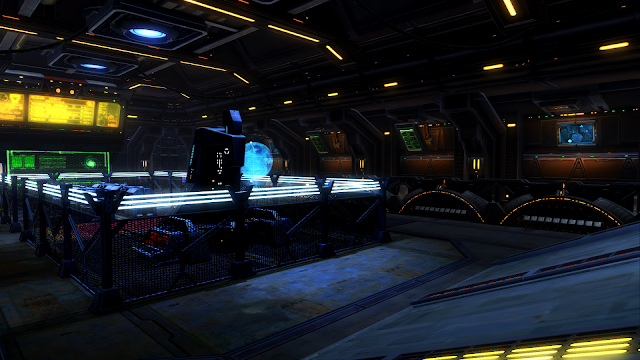 Here we have the bridge, which I initially found nearly impossible to work with but eventually became home to the second structure of which I am most proud within this Stronghold. 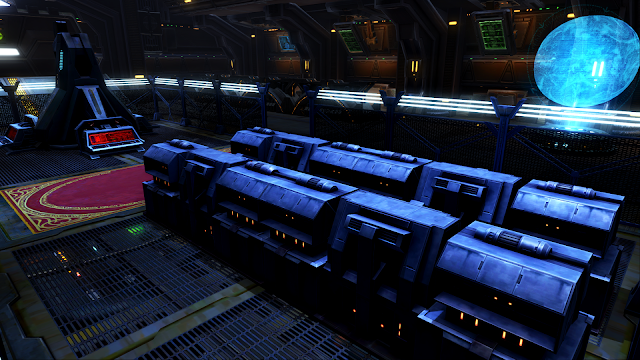 I'm very proud of this collection of terminals and generators surrounded by the security fences. I feel this is pretty much the sort of thing you'd expect to see in some form within a ship of this type. 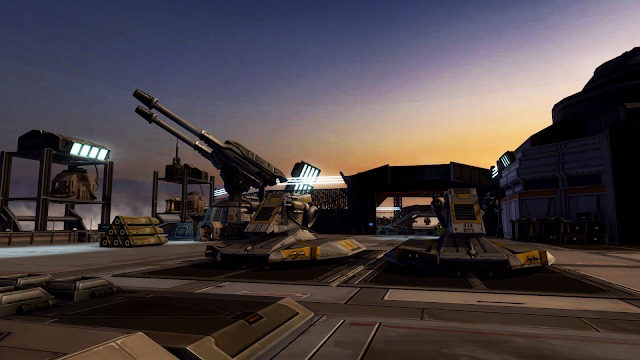 Okay, so I can't really justify Cal's owning of tanks and anti-air turrets from an individual standpoint. Unless she's secretly planning something devious that I'm not aware of, that is... 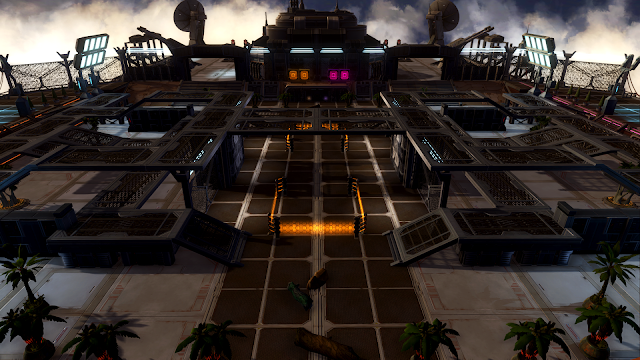 This is the second arena I created especially for the Summer Games event I mentioned earlier. This was used as a traditional Huttball arena with its own series of obstacles to manoeuvre around, but it seems that the game had other ideas when we actually began play. About two minutes into the match, a second Huttball spawned in while the original was still being carried by the Rotworms to the goal line, promptly followed by another once that one had been picked up.

Three Huttballs made for a lot of confusion and frustration among certain participants, that's for sure! 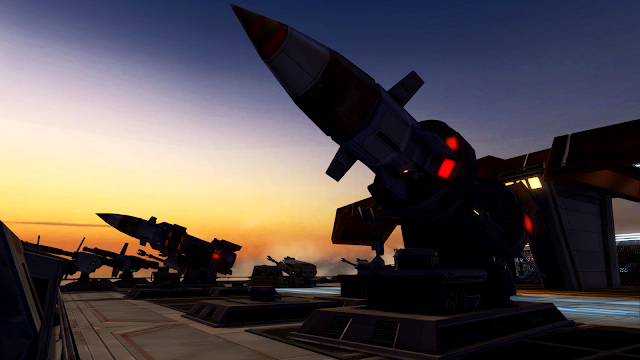 I'm fairly sure at this point that Cal is up to something devious. Maybe I should ask those Jawas about ship-tracking technologies...

I can say with some confidence that, despite its massive 1,600 hook total, Rishi was actually a lot easier to find decorations for than I was anticipating. Granted, it helps to some extent that one of its direct predecessors, Manaan, remains to this day one of the most annoying Strongholds to decorate properly due to its laughably small size compared to the number of hooks that can be filled (800!).

Since its release I've found my opinion on the concept of a Stronghold on Rishi to have mellowed a tiny bit. I still don't think it makes an awful lot of sense from a secure, definitely-pirate-raid-free, perspective, but that's probably just me being me. There are parts of this Stronghold which I really do appreciate and I am a particularly huge fan of the beachfront area.

It won't ever be my favourite in terms of looks, but it works well enough for what it is.
Posted by Calphy at 13:00