I haven't forgotten about my Thoughts on 6.0 series. I wasn't very happy with the post I had drafted up for the Onderon story so I kept it back for a bit until I could improve it to match my expectations. However, I haven't had a lot of time to go back to it with college work and such, so it's still in limbo.

Until then, I'm going to use recent goings-on in SWtOR to re-jigger my blogging capabilities and hope that that finally gets the Thoughts post up to standard.

6.1 brought with it three things which I intend to touch on in posts at some point. The first, something which I had been hoping for ever since Strongholds were introduced, is the Alderaan Noble Estate. The second, the subject of today's post because it's the easiest to write about at short notice, is a small story update, The Task at Hand, which focuses on either Task Force Nova or the Empire's Hand before setting up the 6.2 story in Signal From Noise. The third and final notable change, from my perspective, is the removal of Veteran's Edge in Master Mode Operations.

For now, though, it's time to analyse the little story update and see what happened!

Just a little aside here: all of my characters, both Republic and Imperial, are presently Loyalists who agreed to align the Alliance closely with their respective factions. As such, I have yet to see any variance with these missions and so cannot comment on any differences.

The Republic story update consists of my favourite two characters from 5.10 and Onslaught, General Daeruun and Jedi Master Gnost-Dural (eeeeeee!) visiting Odessen. Sadly neither set up permanent lodgings, but I've already allocated them the best apartments available. Just in case they change their minds.

They're initially delayed by a pirate attack which causes them to separate from Arn Peralun and Tau Idair and necessitating them bringing along several refugees. Both factions' perspectives include several branching options which may or may not come back later on, and the first of these to mention is the choice of whether or not to hand out supplies to five of these refugee groups. At least one refugee will vocally reminisce about either a past action or a familial connection from the base-game upon handing them their goods, which is a great touch! 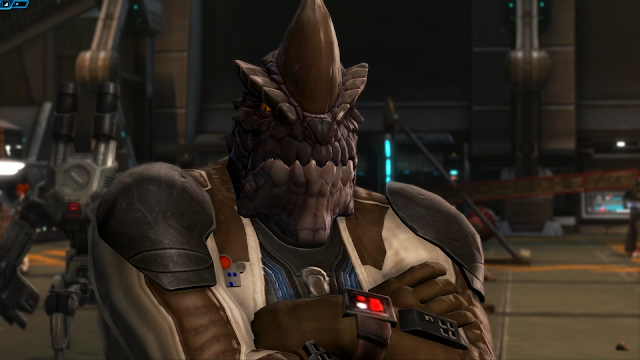 The loyalist-centred briefing that follows basically touches upon the determinant successes following Corellia and the potential securing of supply lines between Odessen and the rest of the Republic. All four Republic classes will also get asked to offer advice on a unique subject tailored to each class. A Consular is asked whether the Jedi on Tython should be reached out to or left to their own devices, a Smuggler is asked how to deal with some Hutts, and a Knight is asked whether a team of Jedi should be allowed to recover and temporarily shirk their duties on the front-line or return to the fight. 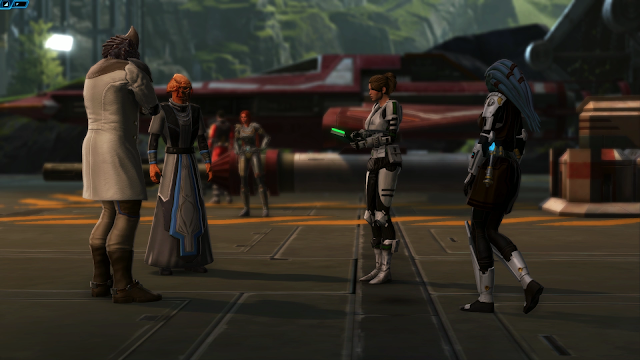 As the above paragraph implies, I haven't yet seen what choice a Trooper gets due to not having a Trooper at this point in the story, which is particularly disappointing this time around - not only does Elara Dorne get a little starring moment in the story for everyone if she's around but she will also have a conversation with the Trooper after the briefing is complete.

I'm pleased to see her get a little moment regardless!

I find it interesting that Tau and Arn were not included in this update. To me, this seems to be because they're still setting up to what extent Arn's actions in the story will have on the student-teacher relationship and it was just easier to not include them until they've got it sorted. Having not had a character who refrained from contacting Tau and setting up the 'bad' relationship I have no idea whether or not Tau's subsequent message will be different in this scenario, but I'm willing to bet that it is. 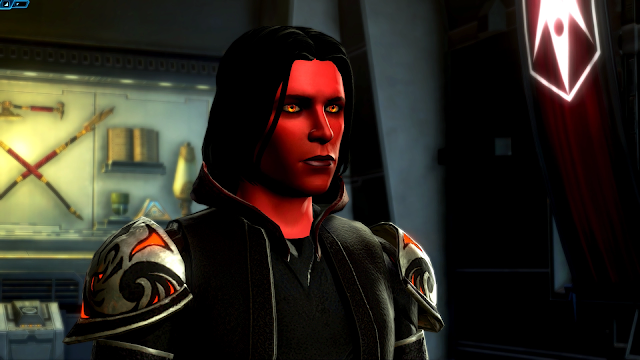 The Imperial story update sees the new Imperial-Alliance liaison, Darth Rivix, visit Odessen. He's a rather interesting character since he's well-spoken and charming, but he may also be the first member of the Zeltron species to be represented in SWtOR. 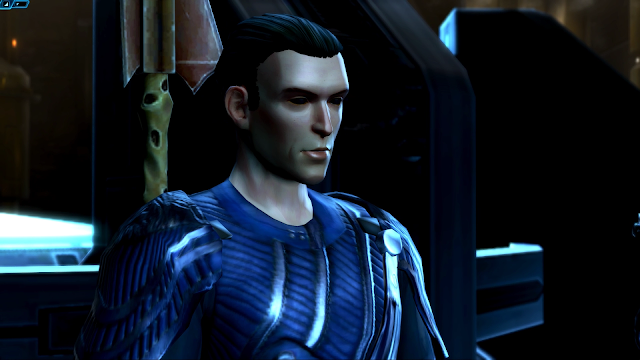 Vector Hyllus, who had encountered Rivix prior to being Joined, gives probably the biggest indication of this in a subsequent conversation with an Agent. He questions whether or not the Agent found Rivix to be "unnaturally" charming, which is a trait usually associated with Zeltrons.

Upon arrival, Rivix can be taken on a tour of the Odessen base or can just be left to figure out what's what for himself. It's a quiet little quest option and I rather enjoyed being a tourist guide within my own base!

In the subsequent briefing, Rivix informs the loyalist Commander of the Empire's (again determinant) successes following Corellia and what supply lines may or may not have been established. Much like the Republic faction, each class has a separate subject to offer their thoughts on; an Agent can choose to execute or monitor some of Xarion's personal agents within Alliance forces, an Inquisitor can reclaim their Silencers or allow the Empire to continue using them, and a Warrior, in integrating additional Imperial troops into the ranks of the Alliance, can order "only the toughest" training for them.

Yep, no Hunter at this point either. I'm working on it!

While this mission was interesting enough, what really made it stand out to me was the subsequent Agent-only conversation with Vector referred to above. It's so great to finally get more base-game Companion interactions in just a normal conversation, and I look forward to getting more as time goes on. 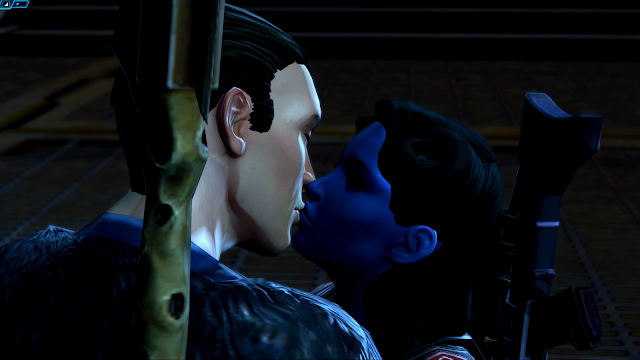 Plus, it means more romancey goodness, so yay!

What of Darth Malgus?


Once the briefings are concluded for both factions, talk turns to Malgus; the Commander and their respective liaisons have noticed his apparent absence following Corellia and are concerned. Unbeknownst to them, but knownst to us, Malgus has set his own plans in motion. 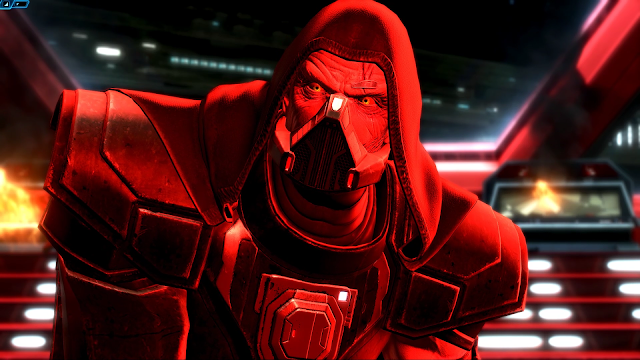 Imperials are treated to a cutscene of Malgus being zapped by either Acina or Vowrawn and ostensibly being forced to 'return'. However, it transpires that this was all a hallucination, of which Malgus has been suffering more and more. He reveals to the medical droid he kidnapped from an Imperial scientist at the end of the Onslaught story that he has heard of one technique that might cure him from his mental strain, and he orders it to set their ship's course for Dantooine. 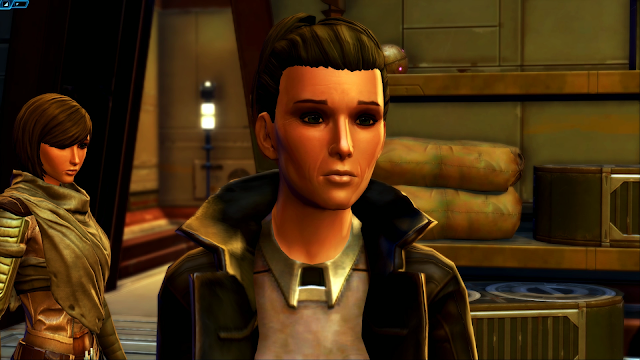 Republic players are shown a cutscene from three Dantooinian farmers' perspectives. One of them, a woman who transpires to be Force-sensitive, reveals to the others that she can sense Malgus's approach and they begin preparing for his arrival. These individuals, I'm ecstatic to say, are none other than Aryn Leneer, Zeerid Korr, and Korr's daughter Arra Yooms.

Leneer and Korr are two characters who I've been hoping to see in-game for quite a long time. They're both featured as characters within the Deceived novel and Aryn's duel with Malgus gets a featured mention in Gnost-Dural's journal as included with the physical Collector's Edition of SWtOR. So, yeah, they're fairly notable names in the story of Malgus, and his reintroduction - as well as the inclusion of Dantooine where they both fled - made me very hopeful that we would get to see them, and here we are!


At the end of Onslaught's storyline, Kira Carsen and Lord Scourge inform us of a Sith plague that has been unleashed by their destroying the original body of Vitiate. They survived the worst due to Vitiate's influence acting as a vaccine, but Satele Shan and her followers, who found and roused them from their plague-induced coma, had no such protection. Their minds are steadily being connected through the Force and merging into something... 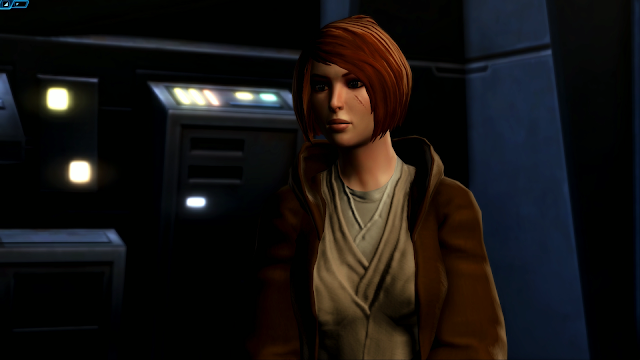 In order to prevent this plague from spreading, Kira and Scourge locked them aboard a small unmanned shuttle and sent it on a programmed and endless flight path, hoping to ensure that it would never be found until they were ready to stop the growing horror within. 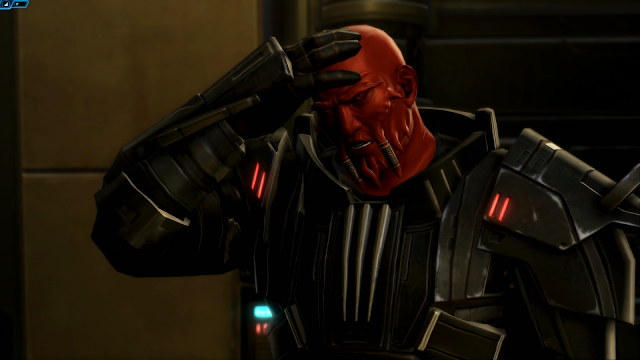 Unfortunately, as of this story update, it seems that this shuttle has gone off-course as it hasn't reached its next scheduled stop. This is news which Scourge reacts especially badly to, although the scale of his reaction is purely due to emotions still being new to him. As a compromise, Kira finds a way of writing T7-O1 back into the story more than three years after his last appearance in KotET Chapter VI back in 2016. She arranges to send him and a bunch of Alliance probe droids off into the unknown to see if they can find the shuttle, since being droids they will be completely unaffected by Vitiate's plague. 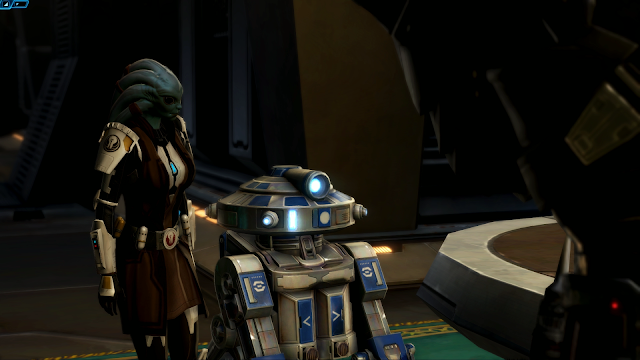 That's all there is to this little update unless the Knight is romancing either Kira or Scourge, in which case they will have the opportunity to walk and talk somewhere quiet.

There's not really a lot to either of these missions, but they fulfil their purposes well enough. The Task at Hand serves as the first indication of how things are going following the potential option to align oneself with a player's respective faction. Signal from Noise shows that Kira and Scourge's plans are going slightly out of control, indicating that the threat is already starting to escalate beyond their estimations.

Despite their short durations, I'm happy with them - particularly so with The Task at Hand. Not only did it mean yet more interactions with Daeruun and Gnost-Dural but it also served as a decent enough introduction to the enigmatic Darth Rivix. I'm looking forward to seeing what role he plays in story going forward...

Then there's the Malgus stuff. I'm not surprised to see him beginning to look into ways to combat his programming as this is something which I thought would be happening when he was first reintroduced back in 5.10. I am, however, elated to see that his reintroduction is allowing for more book characters to be worked into the story. I look forward to hopefully being able to meet Aryn and Zeerid in some capacity!

6.1 sets a few things up and ultimately we don't really know when all these things will pay off. 6.2, coming in a couple of months' time, will finally conclude the Sith Plague story. Regardless of whether or not there's another small story update like 6.1's, it's fairly evident that Malgus's little deviation will be the next 'big' thing before we continue on with open warfare. It's evident from both Gnost-Dural and Sel-Deron's speeches that bringing Jedi back into the fold will be the main focus for the Republic so we'll almost certainly be seeing that be a focus of next year's story, assuming that Malgus's plan (initially?) concludes towards the end of this one.

After that? I've seen people mention that at one of the cantinas representatives from BioWare stated that 6.0 is intended to last eighteen months. This, combined with 2021 being SWtOR's ten-year anniversary, indicates that 7.0 will likely be launching next year. It's too early to really delve into what exactly this may mean for where the current story will take us but Keith Kanneg has hinted quite heavily that 2021 will be the beginning of something 'major' to coincide with the anniversary.

We've got a bit of a wait until that point, however, and I'm looking forward to seeing how everything pans out in the meanwhile.
Posted by Calphy at 13:00